KJIPUKTUK (Halifax) – Late last week Nova Scotia ACORN, an organization for people on low incomes,presented the results of a detailed province-wide on-line and paper survey on the quality of rental housing in the province.

Although not scientific, survey responses provide an indication of the state of repair in rental units, especially as they affect people on low incomes. The survey also allowed respondents to submit comments, some of which you will see reproduced throughout this article.

Most of the 346 respondents from all over Nova Scotia reported that they are satisfied with their relationship with their landlord.

However… the front stairs continue to collapse- the entire building is not insulated properly, the furnace has never been cleaned in approx. 7 years- which is disturbing… etc. etc.

An overwhelming 71% of respondents said that they did not feel threatened by their landlord.

But while most tenants get along with their landlord, many tenants face living conditions and states of disrepair that are deeply concerning. 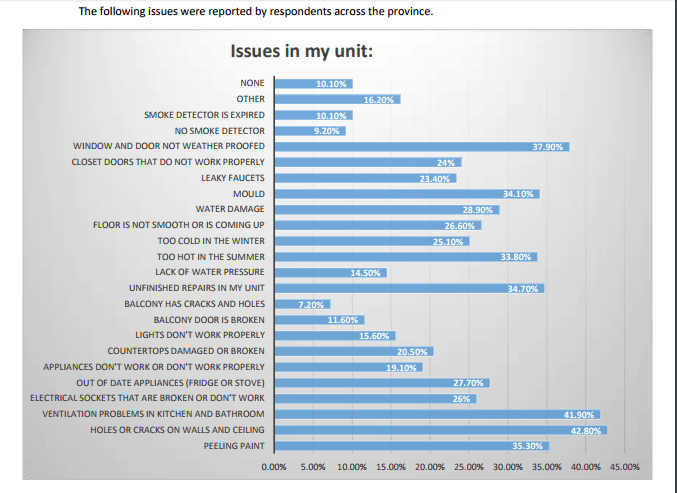 35% of respondents said they experienced a lack of heat in the winter. 38% had problems with hot water, including 10% who could only take cold showers.

63% of tenants implied that repairs were needed the day they moved into their apartment. 67% of these same people indicated that getting the necessary repairs done was “very difficult.”

The well water is very bad, highly mineralized and odourous. It stained my clothing, my clothes washer interior, and ceramic and glass dishware. I believe it was harming my pet’s health as well. I have to get water elsewhere for drinking and giving to my pets.

Particularly worrisome was the lack of smoke detectors reported by 10% of the tenants. 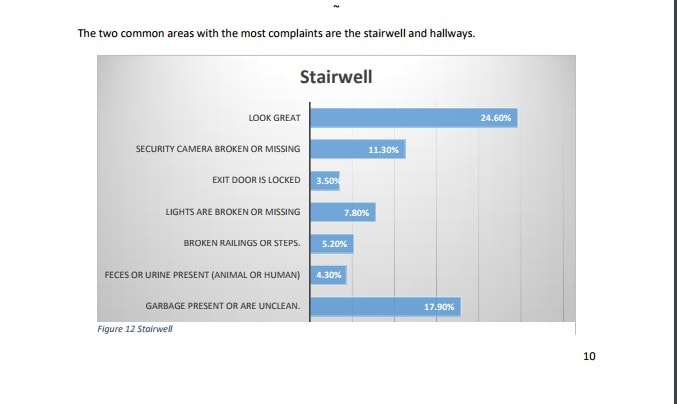 70% of the survey respondents said that their apartment building was not accessible to people with disabilities.

Our heat is terrible, no windows in living room, water leaks like crazy in bathroom, needs to be painted, we tried to seal off the cracks to keep bugs out but they are still getting in, rent too high, we are on disability,…this survey-i really pray we see a change in my lifetime.

The survey results were announced at an apparently well-attended community meeting at the Dartmouth North Community Centre. Unfortunately I was unable to attend, but the entire event was live-streamed on Facebook and can be viewed here.

Implementing landlord licensing has been one of the priorities of ACORN Nova Scotia for a long time. Such a bylaw would require rental apartments to be registered at City Hall and subject to an inspection. This is to protect tenants from bad landlord and substandard living conditions, much like restaurant licensing protects you from unsafe food.

I live above a laundry room. Tenants have 24 hr access. At times this past winter, I’ve
woken to temperatures being 28*in early am hours. I’m dreading this coming
summer.

Rent control is another Nova Scotia Acorn demand, both to keep rents affordable, and to ensure that landlords don’t simply download repair costs onto the tenants.

Earlier this year Toronto implemented a landlord licensing scheme, but although Council is interested in Halifax and asked staff to present a report, things are moving at a snail’s pace.

Next Post Letter: The Community Services  surplus — for shame!