Republished with permission from the excellent Faces of Pharmacare.

I’ve had allergic asthma since I was a young child, with allergies to cats, dust, pollen and smoke. Of course, I didn’t try even a single cigarette. For the most part it was fine – I just kept a rescue puffer at hand and only landed in the hospital for a week’s stay once with asthma. I lived and worked in countries which have a lot of air pollution such as Bangladesh and Afghanistan. 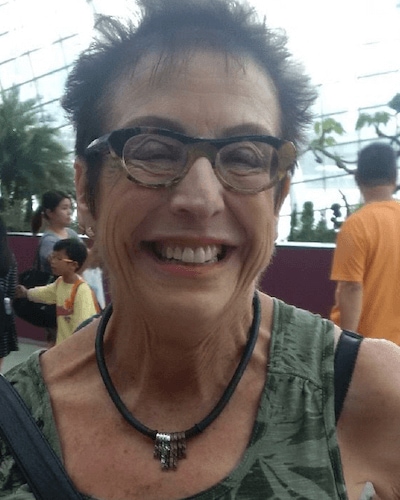 In May 2013 my life changed. I was working on a consulting assignment in Port-au-Prince, Haiti. My colleague was a heavy smoker, but only outside. And at night there was a lot of garbage burning in Port-au-Prince which had still not recovered from the earthquake. On my last day in Port-au-Prince I became sick with a fever and asthma. Undeterred, I managed to go shopping that morning to buy wonderful Haitian art. By the time I arrived back in Nova Scotia I was very, very sick. I recovered from the flu, but my lungs and nose never cleared. From December 2013 until the summer of 2014 I visited my family doctor several times. She kept prescribing different puffers, but nothing helped. I eventually insisted on being referred to a respirologist, for an appointment 11 months away. Looking back I should have been much more aggressive. In July 2014, I went to emergency with oxygen levels approaching 20% and a continuous cough. This initiated some action as I quickly heard from a respirologist with an appointment. He also referred me to an allergic asthma specialist; both have been following me ever since.

I’ve had a few major flare ups-both in Canada and other countries-requiring high doses of prednisone in addition to the steroid inhalers, Singulair, etc. My respirologists agreed in the fall of 2014 that my only hope for some relief was to try the biologic Xolair, but the cost was impossibly high. It was like a Catch 22. How could I afford the $3500 per month for these injections when I was too sick to work; yet I needed to somehow work to pay for these. I considered trying half the recommended dosage but that was still out-of-reach. My respirologists and I decided to begin presenting my case to Seniors’ Pharmacare in NS to apply for exception status. I had all the necessary tests and my levels more than justified support.  Xolair liaison officers helped with the advocacy. Pharmacare refused many times but would not give me reasons and would not share the decision-making criteria with myself nor my doctors. This is what baffled and frustrated me! Why would Pharmacare not be more transparent? What about accountability? And why, in a country like Canada, where we are so proud of our medical system, could I not access a drug I desperately needed?

The last straw for me was in July 2015 when I called Pharmacare again to determine my status. I was, once again, denied an exception. I asked who was in charge of decision-making so I could at least know why. They told me “it was the people over in Halifax.” So I wrote an impassioned letter to the director of Pharmacy who immediately agreed to meet me. They saw how sick and desperate I was and agreed to see what they could do. The pharmaceutical company would not fund me on a trial basis. But with the advocacy of senior health officials, Pharmacare agreed to support me for a 6 months’ trial. This has since been extended based on letters  and data from my respirologists. This drug has saved my life.

I succeeded because I was determined, persistent and angry enough to take action. I knew how to explain my case. I knew how to write convincing letters. I’d been a bureaucrat and a consultant. Many people are too sick to advocate together with their doctors; many people are intimidated by the system; they know it is not fair but feel powerless to influence decisions. Why, in a country like Canada, should anyone continue to be denied access to life saving drugs? Why should the decisions on support for life-saving drugs such as Xolair differ from province to province? Surely national standards should apply? And surely access should be possible. This will not open a floodgate. What will happen in the future as more innovation in drugs occurs and costs escalate more? The bigger picture and the longer-term concern me.

Canada is the ONLY country in the world with universal health care that EXCLUDES prescription drugs. As a result over 3,000,000 Canadians can’t get decent drug coverage due to our patchwork of private insurance and government plans.

Faces of Pharmacare wants to raise awareness of this injustice by collecting and publishing the tragic stories of people who are suffering because of this. Support Faces of Pharmacare by adding your name, possibly your story, and maybe a donation.

Previous Post The power–politics of pulp and paper: Health, environment and work in Pictou County