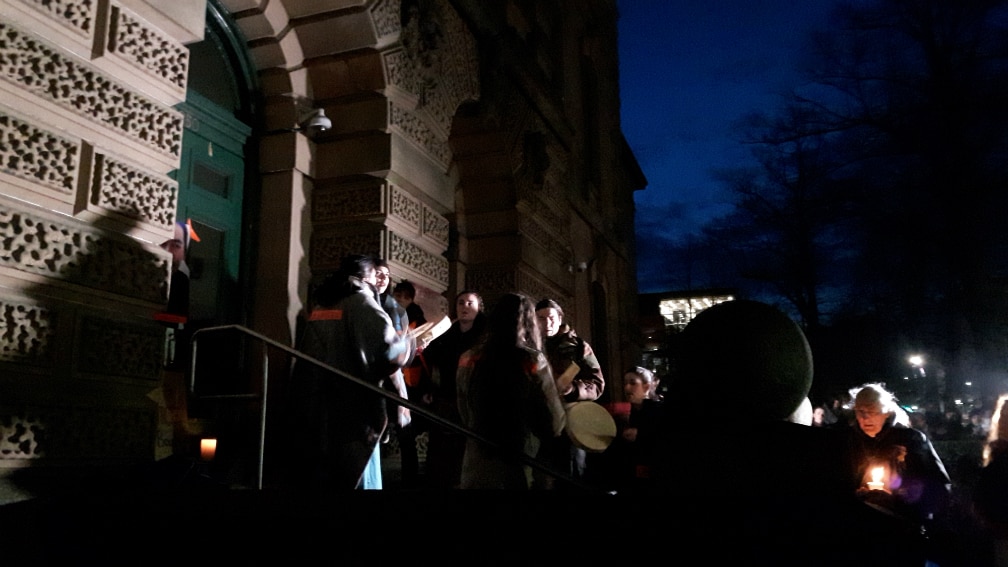 KJIPUKTUK (Halifax) – About 150 Mi’’kmaq people and allies gathered for last evening’s vigil for Colten Boushie at the Courthouse in downtown Halifax.

Colten Boushie is the young Saskatchewan Cree, shot point blank by a white farmer who earlier that day was found not guilty by an all white jury.

Six cops were also present and very much in people’s faces throughout the vigil, which was peaceful and included many children.

Here are some of the voices, from Mi’kma’ki and elsewhere, women and elders, who spoke at the event.

When are the murders going to stop? When is the killing going to end?  The government is not for us. They allow these to kill us all, one by one, mentally, spiritually, bodily. I lost a daughter, she was 26 years old, she was murdered. No justice. Shame on the government. Murders happen in my hometown, they come right into your own house and shoot you in the head. Genocide has to stop today. That is why I curse Edward Cornwallis now. Justin Trudeau, you’re going down.

We have to start watching our back, obviously. We will be mistaken for an animal or a crow. Is this what the government allows to happen to our people? I pray for the mother , I pray for the brothers and sisters, the uncles, the grandparents. Where the justice? you have been doing it to our people for a long time, Canada. But I am a survivor. You brought genocide into my life, and you know what? You aint got me yet, and you aint gonna get me.

We assert our rights to our land, as we stand. We don’t beg them to give us justice.

Today is a sad day. I asked the question earlier. Did reconciliation die today? We have worked all of us so hard to make things different for our kids, for our grand kids, and we’re all now Colten Boushie. It is a day of mourning, but it is also a day of anger, frustration. When is it going to happen that we learn to respect and understand each other?

We are not going away. we have been her for 14,000 years. We’re not going anywhere soon, despite all the attempts of the government to kill us, to take the Indian out of the child, to take us away from our villages, our culture, our values. And despite all inquiries, Truth and Reconciliation, Royal Commission on Aboriginal Peoples, the Manitoba justice inquiry. We have spent a lot of time talking, and as uncle Billie (Lewis) said, begging for inclusion, begging for them to understand us, begging.

But we’re never going to be anything except Indigenous people, Mi’kmaw people, and to the allies that are with us today, one of the things that is really important to support us is to take care of your own, take responsibility to learn. We all need to do that, and today we have to change, we have to take the power back.

There is no justice in  a two-tiered system. We are a sovereign people. We have title to this land, and we will assert that title. Because we see now that we have no choice. This word of reconciliation doesn’t mean a thing. I  wanted to believe it. Didn’t you? I did. But last night at 9:30 PM we learned that Justin Trudeau, Stephen McNeil, they have no interest in our future, they won’t serve us. So who will serve our interest? We will! It’s a new day on Turtle Island, and a new day in Mi’kma’ki, and we’re going to be independent, a sovereign nation.

Previous Post (Angry) letter to the premier: Many of us who are in need only require a fresh, secure start in life