World Autism Awareness Day has been observed on April 2 every year since 2008.  It was designated by the United Nations in 2007 with the purpose of raising awareness about autistic people throughout the world.

The thing is, the day was created by non-autistic people.  And we actually autistic people, especially the radical activist kind, have been writing about our experiences and raising awareness for a long time, certainly well before World Autism Awareness Day was designated.

Many autistic people, myself included, find the traditional “awareness” campaigns to be insufficient and harmful, because the effect of autism “awareness” is that is ends up promoting fear and stigma against us, and encourages non-autistic people to think about ways they can make us more “normal” or pass as non-autistic.

Most importantly, awareness campaigns place a heavy emphasis on what non-autistic people think about us….it’s about us without us!

In response to the “autism awareness” campaigns, an autistic woman by the name of Paula Durbin-Westby started Autism Acceptance Month in 2011.  The concept of autism acceptance has a long history by itself, dating back to as early as 1993 when Jim Sinclair published his seminal essay “Don’t Mourn For Us”.  However, most of the traditional awareness campaigns did not acknowledge the autistic community that had been around for a long time.

The gulf between awareness and understanding is as wide as any ocean.  Awareness is all about creating a sense of urgency and fear. Awareness efforts present us as a problem to be solved, and yesterday.  Awareness operates in stereotypes and soundbites, not real people. Awareness has no substance; it is but a tool to earn more money to fix us and to promote yet more awareness.

Acceptance comes from a place of understanding.  Understanding isn’t generated by soundbites and poster children.  Understanding takes work. To accept us, people first need to acknowledge us as individuals – as three-dimensional, growing, developed characters.  We are not all the same, and we are not but a collection of deficits. Acceptance is seeing that – and seeing that one’s distaste for an autistic person is more likely than not because of “autism”.  Awareness tells you that anything objectionable about us is “autism”, but that explanation is clear, simple, and wrong.

Acceptance requires facing that which makes you uncomfortable about us, thinking about why it makes you uncomfortable, and confronting any prejudice at the root of that discomfort.  To accept us is to make a conscious effort to overcome that prejudice, to recognize that your discomfort with our differences is far more your problem to overcome than ours.

Another good explanation of the differences is this essay by well-known non-speaking autistic activist Amy Sequenzia:

Awareness says: Here is your child.  Unfortunately this is a defective child.  Maybe, if you work with this kid hard enough, you will be able to have at least a tiny taste of the joys of parenthood.  You will need a lot of money. I am sorry for you. Good luck, don’t expect too much.

Acceptance says: Your child processes feelings in a way that might seem odd, but their feelings are real.  The love received will come back, sometimes in a non-speaking way.

Awareness says: Don’t trust the adults who “have autism”.  They are too ‘high-functioning’ to understand the heartbreaking struggles of “real” autism.

Acceptance says: Everyone struggles.  Seek your community / your child’s community for input.

Are you Aware of us, or are you striving to Accept us?

Because the two are almost opposite concepts.

Yet another good explanation of the differences between awareness and acceptance is this infographic created by Lei Wiley-Mydske of the Ed Wiley Autism Acceptance Lending Library in Stanwood, Washington. 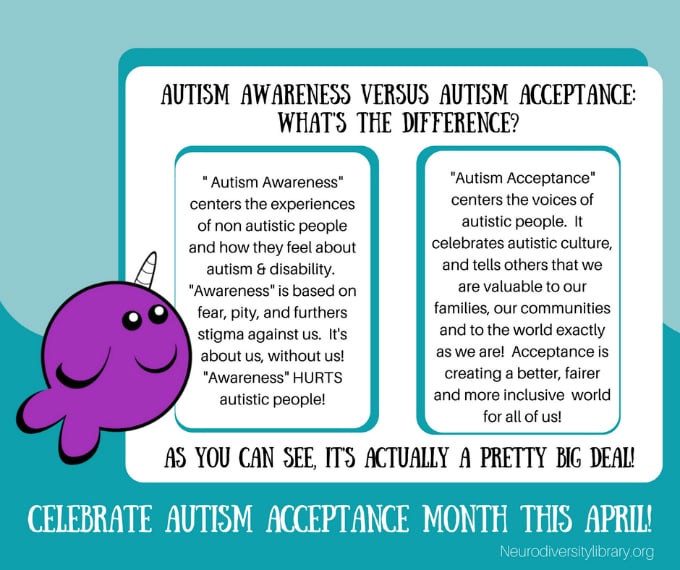 Celebrating autistic culture, and who we are as autistic people

Acceptance is also not about pretending that everything about being autistic is positive, because that’s not true.  Just like anyone else, autistic people have challenges, many of which are outside their control.

So what is autism acceptance all about? 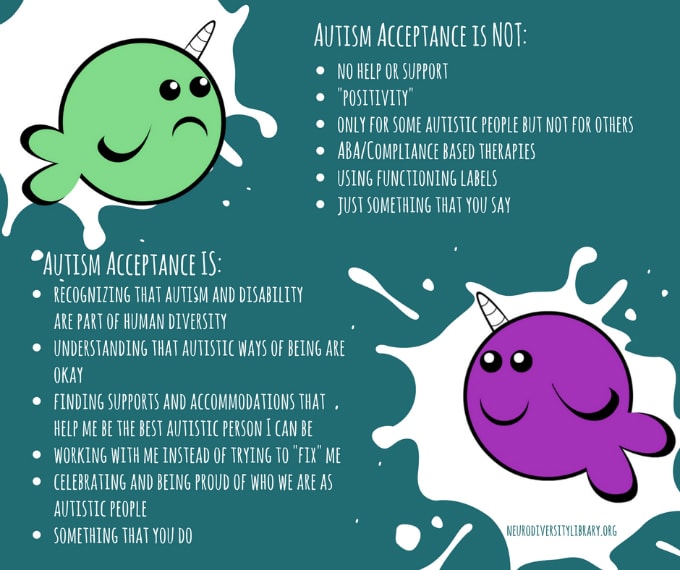 So as you can see, autistic people don’t need, or want, awareness.  Because most people are already aware of autism! Awareness and acceptance are two completely different concepts.  Bringing the two together won’t work, no matter how much the mainstream autism organizations try to say that doing so makes us “better together” or similar platitudes.

So next year, and every year after, let’s ditch the word “awareness” and everything that goes with it, and dive headfirst into autism acceptance.