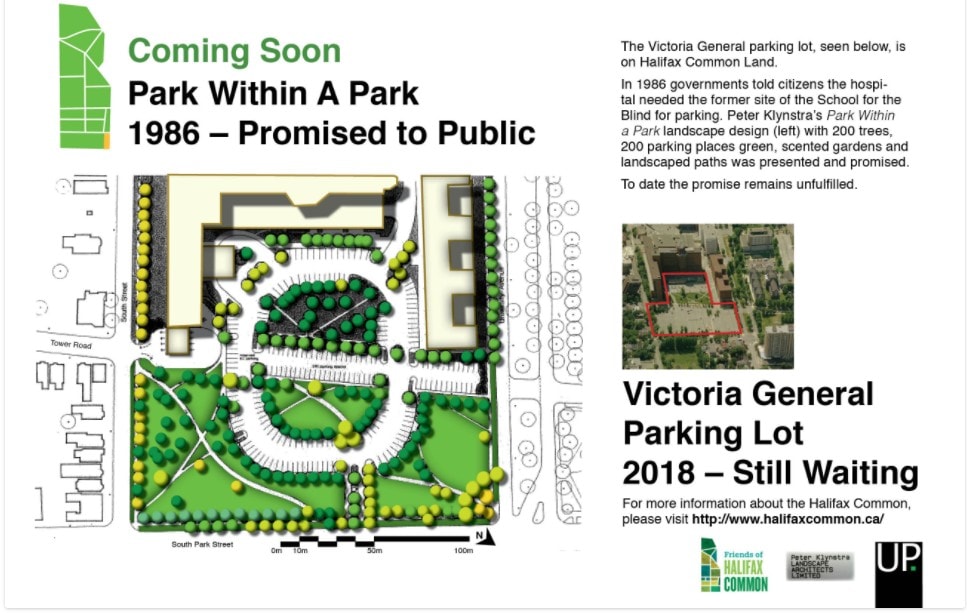 In return for the School for the Blind land being given to the VG, citizens were promised a fully landscaped Park within a Park -200 trees & 200 parking places, a scented garden and a landscaped path along the block of Tower Road included in the deal. Should this be the new Urban Farm location?

Friends of Halifax Common says “Its time to think bigger, that’s how we got the Urban Farm in the first place.” Back in 2007 HRM and Capital Health brokered a land swap for the Queen Elizabeth High site even though it was to return to the Halifax Common. The backroom deal was done before any public consultation. FHC challenged the sale of the Common and managed to convince some smart folks at Capital Health that a good interim use would be a farm/garden. Then FHC introduced them to gardening doula Jayme Melrose and slowly after a genuine public engagement process and a lot of hard work the Common Roots Urban Farm grew.

We need more Common not less. Despite growing evidence that public open space is vital for health and well-being HRM’s draft Centre Plan proposes adding 33,000 new residents in the next 15 years without any new public green space or parks, just higher buildings & more shade, especially on and near the Common. And the Health Authority which sits on 50-60 acres of Halifax Common isn’t clear it places any value on open space (unless you count parking lots).

While other cities around the world are creating new parks HRM can only imagine how to sell, give or trade its public lands, surplus schools and even streets on the Peninsula for development.

We are losing ground. The Halifax Common’s open space is already about 20% of the original 235-acre grant. Recently, without any public process, HRM rushed to support a private-for-profit-pop-up-stadium for a professional soccer team on the newly refurbished Wanderer’s Grounds, even though the field is fully booked with amateur players. And days before the consultation for the Halifax Common Master Plan was announced, HRM silently watched Capital Health purchase the CBC TV Building instead of ensuring its return to the Common. There easily another dozen other examples of HRM approved losses.

We can increase public green space by using city-owned land to extend the Halifax Common and expand its green network. Here are 3 ideas for three directions.

HRM is too careless with our Common. Short term profit is no match for the long-term pay-back of expanding our city’s green space and improving our health, habitat and especially our ability to weather climate change.

So far HRM has not included either the Health Authority, Dalhousie or private lands on the Common in the public consultation process for the Common’s Masterplan. Again this ignores the 1994 Halifax Common Plan. It also pretends that HRM cannot assume its normal government role to regulate planning throughout the entire Common. Being hands-off does not protect the Common but it certainly serves the purposes of developers be they private or institutional.

Its time to cultivate a green attitude. Faced with a dwindling Halifax Common its pretty clear that if we want a Common we better be prepared to defend the Common. Giving away the Common is a bad HRM habit. Every bit counts. So speak up and ask for more not less!

Previous Post Metcap Living tenant: It’s been a nightmare since day one

Next Post News release: Justice For Janitors rally this Thursday; new statement on the campaign