KJIPUKTUK (Halifax) – The Founders Square cleaners lost their jobs, with less than two weeks notice, because their boss lost a janitorial services contract. It so happened that employer found them other positions, but there was no legal obligation to do so. 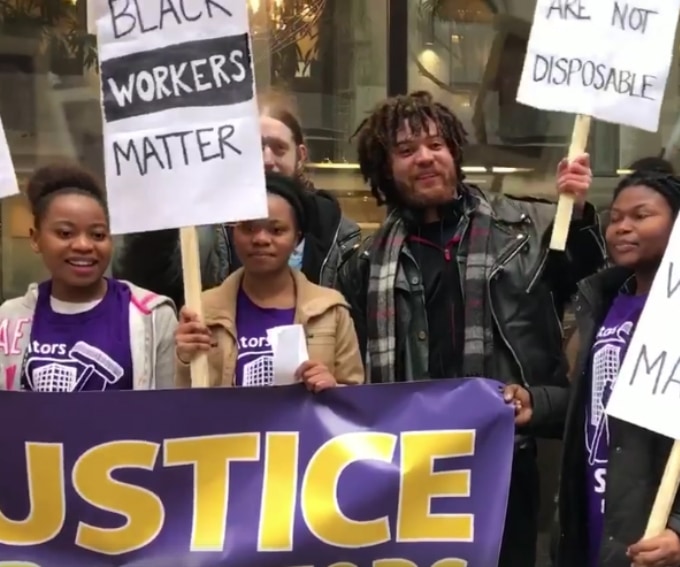 Meanwhile Smiling Goat baristas are not getting paid what they’re owed, they often don’t receive pay stubs, and they can only hope their employer is paying their government deductions.

You’d think that kind of stuff was against the law, but, as the baristas and cleaners can attest, in Nova Scotia there is little to effectively stop these kinds of things. In some cases it may be illegal, but getting justice is another matter.

Because of this the Service Employees International Union (SEIU), representing both the cleaners and the Smiling Goat workers, and the Nova Scotia Federation of Labour (NSFL) are asking for changes to the Labour Standards and Trade Union Acts to protect workers.

There are lots of exemplary employers, but nonetheless wage theft is fairly common, says NSFL president Danny Cavanagh. There is both the blatant wage theft as experienced by the Smiling Goat workers, as well as the more subtle variety that manifests in things like rounding down hours worked, withholding of tips, not paying for job-mandated training, and the all too familiar work-related email sent after hours with the expectation of a response.

One thing that would be tremendously helpful is to have inspectors with similar powers as those who enforce occupational health and safety standards in the workplace, says Jackie Swaine, president of SEIU Local 2 – Nova Scotia.  Smiling Goat baristas, who are owed tens of thousands of dollars, can file complaints with the Department of Labour, but that’s a lengthy process. Baristas and other low wage earners really don’t have time to wait when the rent is due tomorrow.

The NSFL and SEIU are also calling for worker protection in case an employer goes bankrupt. Give employees priority over other creditors, says Cavanagh, and make directors of corporations and owners personally liable.

Similarly, contract flipping is not an unusual, and can have devastating effects on workers. In the most recent case at Founders,Square, the incoming contractor, Deep Down Cleaning, never offered current cleaners their old jobs, and even if it had, they would have earned less. Workers received a mere two weeks of notice that their services would no longer be required.

These typically disproportionately affect women, visible minorities and immigrants, notes Cavanagh, who wants the Labour Standards Code amended to ensure workers keep their jobs and working conditions do not deteriorate. If the workers are unionized than they should also keep their union.

Imagine the instability and fear these workers face each time a contract goes up to tender, says Swaine.

Swaine and Cavanagh have met with civil servants at the Department of Labour, and are now calling for a meeting with the minister.

Previous Post The ugly underbelly of the shipping industry: hourly wages as low as $1.37