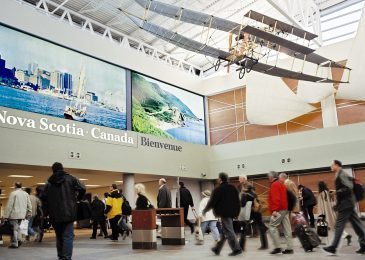 KJIPUKTUK (Halifax) – Commissionaires will no longer be providing security at the Stanfield Halifax International Airport.

Instead, the Airport Authority offered its new security contract to Toronto-based G4S. Commissionaires Nova Scotia was one of the six unsuccessful bidders, CBC’s Preston Mulligan reports.  161 commissionaires, many of them full time, were employed at the airport.

It was probably all about the money.

“They didn’t give us a formal debrief on why we weren’t the successful bidder but I assume it’s cost,” Bruce Belliveau, CEO of Commissionaires Nova Scotia told the CBC. “It could come down to the fact that we have a policy of trying to provide pay that’s appropriate for veterans. These are people who have served their country.”

Belliveau goes on to explain that the airport commissionaires, members of the Public Service Alliance of Canada Local 85100, earn a starting salary of $12 per hour, rather than minimum wage, and typically earn between $13 and $20 per hour.

It is assumed that G4S outbid Commissionaires Nova Scotia and its other competitors by paying its workers less money.

The Airport Authority told the CBC it cannot comment on an internal business decision. Yet many believe that the Authority’s responsibilities extend beyond the bottom line.

The commissionaires’ story is similar to what happened to the airport cleaners early in 2015. Eurest Services, holder of the cleaning contract, paid airport cleaners wages barely above minimum wage. Doing otherwise it would be underbid by competitors, the company feared.

At the time the cleaners’ union, Teamsters Canada Local 927, argued that the problem wasn’t just the employer.  Rob Beairsto, president of the Local, wanted the Authority to impose fairness standards on the companies that bid for these cleaning contracts.

“The Authority should say (to facility management companies) that if you want to bid, you have to guarantee a couple of dollars above minimum wage,” Beairsto told the Halifax Media Co-op at the time.

G4S, not just any security company

G4S is described as a Canadian company in the CBC story, but G4S Canada is part of a British multinational security services provider that has operations in 125 countries.

The Intercept references G4S involvement in many unsavory operations worldwide, including Israeli prisons and “interrogation centers.” There is also a Wikipedia page devoted entirely to Controversies surrounding G4S.

The company most recently made the news when its homophobic employee Omar Mateen shot 49 people in the Orlando nightclub shooting.  How Mateen had passed the company’s security checks after an FBI investigation raised doubts about his stability remains a bit of a mystery.

In July the City of Halifax awarded a five-year contract for parking enforcement services to G4S Canada.

The Toronto Star reports that an inspection blitz by the Ontario Labour ministry in January 2016 found that G4S and other employers of precarious workers frequently violated the Employment Standards Act, including shoddy record keeping, excess hours of work, and failure to pay overtime.

Next Post Guest op-ed: The power of a single word