KJIPUKTUK (Halifax) – Among other things, an HRM lawyer argued that racist comments made by employees at Halifax Transit are protected by the Charter of Rights and Freedoms.

The argument was made during the recent Nova Scotia Human Rights board of inquiry that looked at the poisoned work environment at Halifax Transit.

I never would have caught this if it wasn’t for this tweet by Nijhawan McMillan, a small law firm based in Halifax. 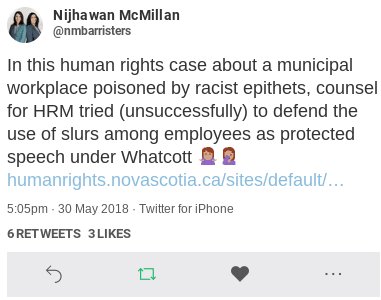 HRM’s lawyer referred to Saskatchewan (Human Rights Commission) v. Whatcott, where the Supreme Court of Canada ruled that pamphlets containing derogatory remarks about gay people were protected under the Charter of Rights and Freedoms,

Barrister Lynn Connors, chair of the tribunal, was not convinced.

“The case before me does not have anything to do with freedom of speech or the distribution of pamphlets,” she writes in her decision.

Makes you wonder who at City Hall would have approved such repugnant legal tactics.