It made him physically ill. “Mason told his colleagues that upon reading the details contained in that decision he was sick to his stomach,” Jacob Boon reported for the Coast after the June 20 council meeting.

Mason is to be commended for being upset. Yet, even with his stomach so badly affected, Mason does not think a public inquiry is called for. Instead CAO Jacques Dubé will provide quarterly public progress reports on racism, sexism and harassment within the municipality’s workforce, Boon writes.

“A public inquiry would be a moment in time. This is an ongoing commitment,” Waye Mason is quoted as saying in the Coast article.

There is lots wrong with this statement. For starters, ongoing commitments to keep the public updated and public inquiries aren’t mutually exclusive. We should do both.

Council and city management had years to fix the widespread racism and bullying that occurs at its workplaces. They were awful at it.

As councillor Lindell Smith suggests, councillors’ collective tummies should have been aching two years ago, when we first reported on the widespread racism (and misogyny, ableism, and homophobia) at the city’s Municipal Operations division. 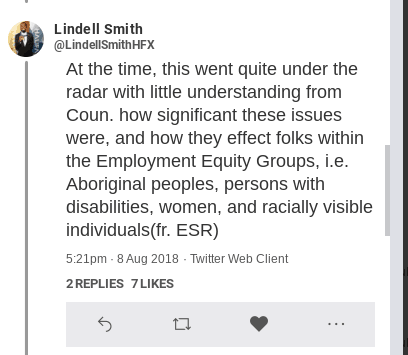 Behind closed doors councillors were given progress reports by management, the Nova Scotia Advocate was told two years ago, but clearly they never asked questions. Just a couple of months ago, African Nova Scotian outside workers rallied at City Hall because regardless of reports and recommendations nothing had changed on the ground. “The anti-Black racism and discrimination within HRM is at 1950s levels,” the workers explained. “We must do better,” said the mayor.

Where were our councillors all this time?  What has changed that now we can be confident that these same councillors will hold city management accountable?

This Tuesday at Halifax Council there will be an update by CAO Jacques Dube, requested by Lindell Smith and focused on the Municipal Operations division, home to the workers who keep our parks looking lovely and our streets and sidewalks free of snow.