KJIPUKTUK (Halifax) – Feminicide occurs when a government fails to take action to prevent or intervene to hold men accountable for acts of violence perpetrated against women and girls. This includes a systemic failure to abolish misogyny.

Separating and naming the killing of women and girls as femicide versus being content with using the general term homicide for all killings is necessary. It exposes the violent dangers that can exist in women lives. The Canadian Femicide Observatory for Justice and Accountability states that socially and legally naming femicide distinguishes the relational circumstances of the women who are killed in comparison to the relational circumstances of the men who are killed. Although the primary killers were male, their relationships to those they kill are vastly different. In 2015 for instance, 76 percent of femicides—the killing of women and girls—were committed by their intimate partners, a non-parent family member, and a parent; whereas, 77 percent of males were killed by casual and criminal acquaintances or by a stranger.

This knowledge means that in this mass shooting inquiry a feminist analysis needs to address femicidal violence as distinct from homicidal violence. Femicidal violence is attached to misogynistic beliefs and attitudes that feed violent relational behaviours. A question is whether the culture of the RCMP is tainted with misogynistic perspectives to such an extent that in 2013 officers dismissed behavioural red flag warnings when responding to reports of this killer’s serial assaults of his partner. This killer began his over 13 hours of killing, wounding, and burning of houses by confining, handcuffing, and assaulting his partner. There is reason to consider that if she had not escaped when he left her alone, his intention may have been to kill her.

Repeating the question: Why insist on naming and using the term femicide?

This invisibilization of domestic killings stands out again when reviewing Stats Canada infographic Homicide in Canada 2017.  This infographic shows that the rate of homicides for men was 74 percent and for women 26 percent. It fails to educate that the killing of women was predominately related to male violence perpetrated within domestic or intimate partner relationships. As previously stated, this is not the relational circumstances where men kill other men. Therefore, using the term femicide provides this distinctive truth-telling clarity. It prevents invisibilizing the degree of life-threatening misogynistic dangers that exists for women and girls within violent intimate, family, and parental relationships.

Where Canadian Domestic Violence Death Review Committees (DVDRC) exists their studies identify femicidal risk factors. For instance, in Ontario from 2003-2017 311 cases were reviewed by the DVDRC. The top two femicidal relational risk factors indicated that 72 percent of deaths involved domestic violence within the couple’s relationship; 67 percent were experiencing actual or pending relational separation. In addition to these, ten other top risk factors were listed.

We suggest that five of these 10 femicidal risks factors can be identified as misogynistic-based behaviours. These are men’s obsessiveness, sexual jealousy, creating an intuitive sense of fear within his female partner, threats to kill his female partner, and escalations of relational violence. These behaviours are similarly listed in the Duluth’s power and control wheel that focuses on domestic male violence against women.

The remaining five femicidal risk factors relate to the perpetrator himself. These include depressiveness, threats or attempts to commit suicide, excessive alcohol and/or drug use, unemployment, and a history of violence outside the family. Seven or more of these 12 top femicidal behavioural risk factors were present in 71 percent of Ontario’s DVDRC 311 case reviews.

Prior to this man’s mass killing did seven or more femicidal red flag risk factors fit into the top 12 listed by the Ontario DVDRC? Referring to media articles exposes the following evidence:

Based on this evidence nine out of the 12 femicidal risk factors existed.

Ten Years of Mass Shootings in the United States revealed between 2009-2018 that the majority of mass shooting occurred entirely in the home. Followed by shooting in public spaces and the less occurred in the home and public as illustrated in the diagram. In at least 54% of these mass shootings the shooter killed an intimate partner or family member.

Domestic violence mass shooting resulted in nearly three in four children and teens killed. This research defines mass shootings occur when four or more people are killed, excluding the shooter. The mass shooters were mainly adult men who acted alone and mass shootings are not random. Prior warning signs of domestic violence and gun access were often present. Researchers said “Red Flag” laws or Extreme Risk laws related to gun control helps de-escalate such gun-related shootings. Therefore, identifying and responding to red flag warnings in attempts to prevent femicides can also help save the lives of others.

Will ministers include a feminist analysis how misogyny relates to the mass shooting? 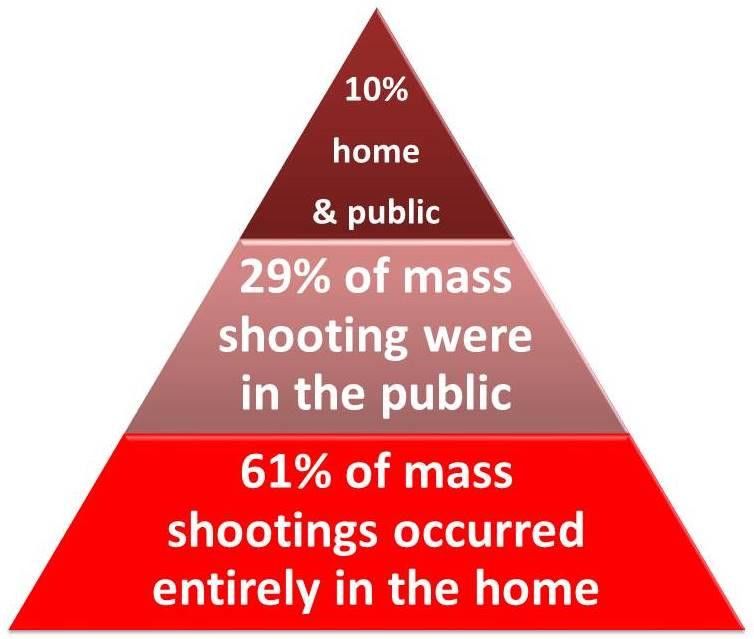 Minister of Justice Mark Furey indicated he will release information detailing a joint federal/provincial public inquiry this month. He speaks of including a gender-based analysis in an inquiry. This, however, does not mean that a feminist analysis will occur to specifically dig into misogyny as a root issue or as a hate crime that feeds violent male assaults, torture, and femicidal risks perpetrated against women. One intervention that will tragically fit into such an inquiry is initiating Minister’ Furey’s previous amendments to the Fatality Investigation Act to create a Nova Scotia Domestic Violence Death Review Committee (DVDRC) and Child Death Review Committee in 2020.

Concerns that calling for a feminist analysis may be ignored jumped out at Nova Scotia Feminists Fighting Femicide (FFF). Contacting Maryam Monsef, Minister for Women and Gender Equality (WAGE) to ask that she support a feminist analysis in a public independent inquiry brought a response from her Manager, Briefing and Correspondence Unit. Julie Gauthier stated, “I regret that the WAGE cannot become involved in matters outside its mandate,” dismissing violence against women and stating it was an RCMP issue under Bill Blair, Minister of Public Safety and Emergency Preparedness. This response was shocking. It ignores that one mandate of WAGE is ending gender based violence. Gauthier’s response also fails, in our opinion, to dismiss the present federal government’s expressed feminism values and that women’s rights are human rights. It also ignores the End Femicide and Misogyny in Nova Scotia. An Inquiry Now!, the petition demanding a “feminist lens that continues to grow.”

Prevention of femicide and mass shootings

The inclusion of a feminist analysis in an independent public inquiry requires focussing on misogynistic-based behaviours. Besides learning to actively respond to red flag behavioural warnings listed by the Ontario Canadian Domestic Violence Death Review Committee, other studies on mass shooters can also inform. Such as exposing similar and different behavioural warning signs of aggressiveness and “leakage of violent intent” to others; this means a person may intentionally or unintentionally suggest to others their thoughts, attitudes, or intentions to commit a violent act. This mass killer did have leakage expressions. He bragged about having knowledge on how to dispose of bodies. In this same article on mass shooters other behavioural risk factors that applied to this killer was his preoccupation with weapons such as guns. Guns and an intentional made to look-like-a-RCMP-car and wearing an authentic RCMP uniform were ultimate weapons used during his killing rampage.

Intervening when red flag warnings are present and attending to gun control are essential efforts to preventing femicides and mass shootings. Not only must the police note misogynistic-based red flag warning behaviours, all Nova Scotians and Canadian society members must learn when and how to speak up.

Therefore, a feminist question of the federal-provincial inquiry is: How will Nova Scotians and the police services citizens pay for decide to take responsibility to effectively respond to red flag misogynistic behaviours when confronted by reports of male violence against women and girls that can lead to a femicide or to mass shootings?