Not just residents are running out of patience. Brendan Maguire, Liberal MLA for Halifax Atlantic, is supporting the group that calls for a rent strike.

For years many tenants of the Metropolitan Regional Housing Authority (MRHA) have lived in units in bad repair, often mouldy, at times containing asbestos, and infested with rodents.

Been waiting for housing to respond to my emails i sent about the hole that has been getting bigger in one corner of my unit in the back yard… I’m assuming rats are making this hole ? …. Sure would like to have someone come and deal with this before i have a whole family of some kind of pest living in my home. Facebook, August 15 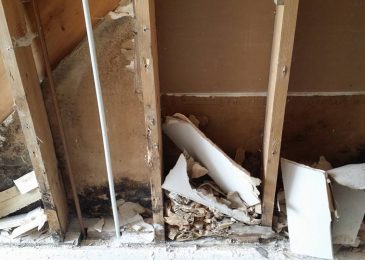 The MRHA, one of five Housing Authorities in Nova Scotia, is part of Housing Nova Scotia,  a provincial government corporation, with the Minister of Community Services in charge.

Brown says that Janet Burt-Gerrans, general manager of the MRHA, earlier told her that five additional maintenance staff would be hired in short order.

“According to Janet these people were supposed to start working two weeks ago. She told me the minister of Community Services gave her all the resources she needs to get this place fixed up,” says Brown. “We’re still waiting.”

Still waiting for a proper sized screen for on of my living room windows since mine is a bit too small and its loose… I’ve requested a couple times now and have gotten no response at all… Sure hope my almost 1 year old doesn’t fall out the window someday when he stands up which he is starting to do. Facebook August 15

Earlier calls for a rent strike were suspended after MRHA promised to take action.  Tired of waiting, the countdown to a rent strike is back on, says Brown.

This morning Brendan Maguire, Liberal MLA for the area, tweeted his support for the group. 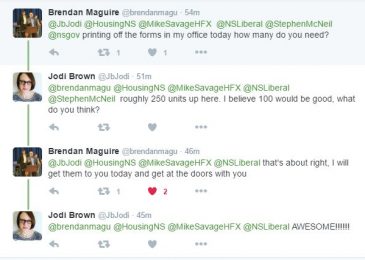 After publication of this article, Maguire sent us the following tweet to clarify his position.

There is more to a rent strike than just to stop paying rent.

The Residential Tenancies Act requires landlords to keep the premises “in a good state of repair and fit for habitation.”  That applies just as much to government as it does to private landlords.

If your landlord doesn’t meet that requirement then tenants can file a complaint with Residential Tenancies. If your complaints are deemed valid, your landlord will be ordered to do the necessary repairs.

After you submit your complaint you can opt to pay the the rent to the Residential Tenancies in trust, instead of to the Landlord. That’s what would make it a rent strike.

My friends place. This window was broken 3 summers ago, by the previous tenants. (I know cause I was around when it happened)  My friend has been in this unit almost a year and a half and this is STILL not fixed. Facebook August 11.

In other words, you pay the rent in trust, and the landlord will get that money once they meet their obligations. Or if the Residential Tenancies doesn’t think your complaint was warranted.

“We have the forms, and we’re making the rounds. We’ll document our needs for repairs, and prioritize them. If hey don’t fix them, we will file for our rent to go into a trust. So we are officially starting the process of a rent strike. The count down starts today,” says Brown.

When the call for a rent strike was first issued Burt-Gerrans told Global News  that she would encourage any of the tenants to come to the Housing Authority directly.

“Just the other day a neighbour called the Housing Authority because she has mould. All the drains were installed improperly, and things leak. She was told to buy Javex,” says Brown.

Updated August 29 at 10:25 AM to further clarify the support offered by Brendan Maguire.

Next Post Lives on welfare: The day I got yelled at by Community Services staff