KJIPUKTUK (Halifax) – Our series ‘Lives on Welfare’ continues with Joe’s story (not his real name). Chronic illnesses makes it impossible for Joe to work, and he relies on social assistance to make ends meet. The event he describes occurred in 2011. Joe is one of the most soft spoken and forgiving people I know. 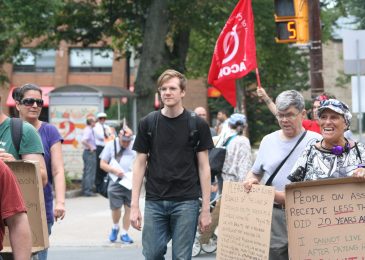 When you’re on welfare generally every month you have to submit a short form where you record all the income you received over the last month. It’s called your income statement.

Not too long after I went on social assistance I took my income statement to the Community Services office on Gottingen Street to drop it off. These days you drop the form off in a little red box in the lobby. Back then, when I was still new to social assistance, you took it to the reception area, and dropped it off at a sort of wicket window.

I gave the form to a woman, who read it, and then proceeded to yell at me for not filling it out properly. This happened in front of an entire room full of people, other people waiting for an appointment, and staff. While she was yelling at me a security guard looked me up and down, as if expecting me to react. That’s not my style at all.

I felt so humiliated that I wanted to cry.

My very great and terrible crime was that instead of putting the word none beside each type of income I had written zeros. There is an instruction to write none or nil.

Two or three days later I received  a letter in the mail, telling me not to do it again or I would not receive any further assistance. In the future please write none in the blanks and not a zero, or the form will not be processed, the letter stated.

I mentioned ten incident to my caseworker. She made the appropriate sympathetic noises, and she genuinely seemed to be unimpressed. But I also had the impression that she thought nothing could be done. Indeed, after I requested a copy of my file from Community Services in 2015 there was no note of what I told  my caseworker at that time.

I always try to treat people as how I would want to be treated if the roles were reversed. And if I fail at it I always try to make it right. To be fair, I have dealt with really good people at Community Services. But by and large my experience is on the other end of the spectrum.

See also: Lives on welfare. How many steps can you walk?