KJIPUKTUK (Halifax) – If your apartment needs repairs, is too expensive and moving is out of the question, then things aren’t likely to improve in the foreseeable future.

Statistics Canada census data released in November 2017 shows that the number of households in core housing needs in Nova Scotia continues to go up, while the trend in the other Atlantic provinces is moving downward.

To be considered in core housing needs you must meet two conditions:
1 – you live in a dwelling that doesn’t have enough rooms, or is in a state of serious disrepair, or is too expensive given your income;
2 – while you have no choice living where you do because there is nothing better to be found.

Earlier we wrote 2016 Census-inspired stories about the quality of housing in Nova Scotia (Where the shitty rentals are), and affordability (Rent poor in Nova Scotia). The stats we’re discussing today take into account both these factors, and also throw suitability (enough rooms) in the mix.

But most importantly, we introduce a second criteria, namely that these Nova Scotians have nowhere else to go – no affordable, adequate and suitable housing alternative is available in the area where they live. In other words, these are the Nova Scotians truly in dire straits, the ones that are completely stuck.

We’re not just talking about a few unfortunate people. Almost 50,000 Nova Scotia households found themselves in this situation in 2015, that’s 12.8% of all households. The overall Canadian average for that year is 12.7%.

Halifax just missed the top ten large cities, finishing in 11th place with 13.7% of its households in core housing needs. Urban Cape Breton has a rate of 13.4%. 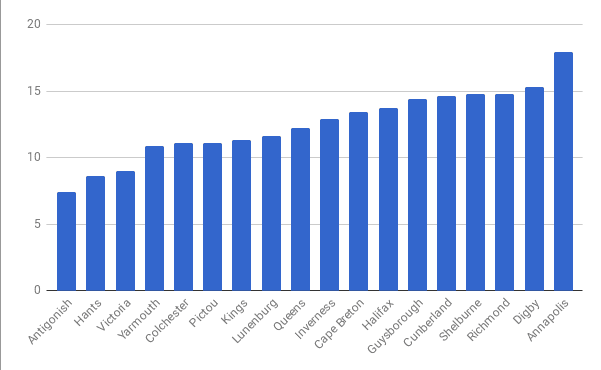 In rural Nova Scotia Annapolis County leads the pack with a rate of 17.9%, followed by Digby County at 15.3%, and Shelburne and Richmond Counties, both at 14.8%. Meanwhile, counties such as Antigonish County (7.4%) and Hants County (8.6%) are doing far better than Nova Scotia as a whole.

Next Post The power–politics of pulp and paper: Health, environment and work in Pictou County