KJIPUKTUK (Halifax) – There are compelling reasons why food safety regulations stipulate that you should be able to wash your hands in a restaurant, for your own good, and for the good of your fellow citizens. You don’t want to spread diseases, after all.

Yet if a washroom isn’t wheelchair accessible government looks the other way. Gus Reed, who relies on a wheelchair, believes that’s discriminatory. He believes that so strongly that, together with five others, he filed a complaint with the Nova Scotia Human Rights Commission. 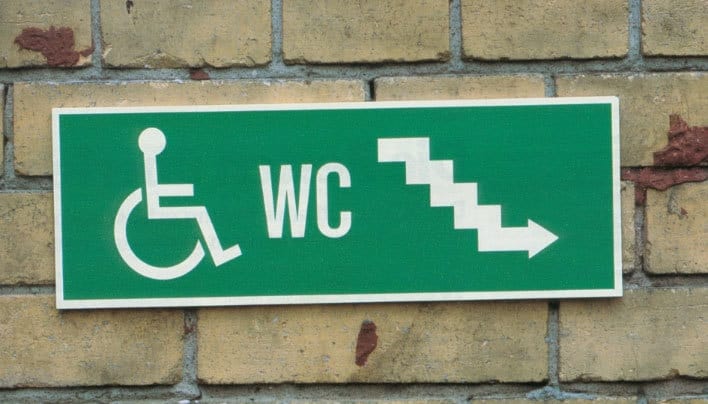 That complaint was first lodged in late July of 2016.  Two years later the complaint is still not resolved, and Reed has done lots of thinking about the reasons for this sluggishness.

One of the main reasons is the Commission’s tendency to take an overly formal approach, and make complaints go away rather than fight for what is right, says Reed.

“They are so busy trying to pigeonhole and dismiss a complaint that they don’t take time to think. It would be simple thing for them to do,” says Reed. “But instead they mount lots of peripheral arguments about jurisdictions and procedures, and I find that disappointing. They should take the law seriously, and if it is inconvenient, I am sorry, but there is more at stake than their convenience.”

Reed and his fellow complainants encountered this attitude almost immediately. The Commission rejected their complaint, without even launching an investigation, arguing that the complaint was a building code issue, not a human rights issue.

They appealed that decision at the Nova Scotia Supreme Court, and they won. Resoundingly so. We wrote about that victory about a year ago.

“Our initial complaint was pretty clear. There was an injustice taking place in the enforcement of food safety regulation, but the response that we received from the Human Rights Commission was a bunch of mumbo jumbo,” says Reed. “Justice Edwards in his decision was right on the money, saying that the Human Rights Act trumps other considerations, and that the Commission has no authority to reject a complaint without investigation.”

When you file a complaint you have the right that this complaint will be inquired into, wrote the judge. If as a Commission you feel you’re too busy, go talk to the government, or change the law, but don’t just turn down complaints without providing reasons that are deemed valid in the Human Rights Act.

Not much has happened since the March 2017 Court decision, says Reed. The group met in December of last year and a hearing was scheduled for July 5, 2018, 707 days after that first complaint was relayed to the Commission.

“When we talked in December I didn’t figure it would be July before we’d get a hearing, I thought a couple of months. But everybody is busy doing things, maybe there aren’t enough lawyers to go around. It seems unconscionable,” Reed says.

More staff is one thing Reed would change, but more importantly, he would like the Commission to focus less on process and more on substance. He’s critical even of the way a complaint must get filed.

“The Commission insists that the complaint be done on their form, which I think is a peculiar thing. I don’t think that the form is very clear, and I don’t see the virtue of putting together words in their context. By doing that they force a complainant to do things their way, and really they should be spending their time investigating substance of the complaint,” Reed says.

As well, Reed suggests that ideally you shouldn’t need a lawyer to pursue a human rights complaint.

“I have learned that’s not the way it works. I hope somebody in the government will pay attention to this, because we made every effort to do this on its own terms, but it turns out you can’t do that, you got to have a lawyer.”

We asked the Nova Scotia Human Rights Commission if the Justice Edwards’ decision had caused it to change its intake processes.

“Yes, there have been some changes to how the Commission processes complaints. Please note that we are in the process of reviewing the Commission’s policies and procedures. Once they are approved by our Commissioners, they will be made publicly available on the Nova Scotia Human Rights Commission website,” writes Adria May, spokesperson for the Commission.

Previous Post Open letter: Temple Grandin should not be invited to speak at the Atlantic Abilities Conference