We make the following disclosures before answering the two questions posed in the title.

Our ethical, professional, and personal writing about the misogynistic roots of male violence against women and girls is influenced, first and foremost, by our different yet similar childhoods of being born to very violent fathers who battered our mothers.

When we were children domestic violence was not a specific crime. Rarely did bystanders appear to care or try to intervene in such so-called “family matters.” Such social dismissals were painful. Today, decades later, although laws have been achieved, dismissal of misogynistic attitudes that contributes to such violence remains, and as evidenced contributed to the mass femicides and homicides of April 2020.

Our second disclosure is that I, Jeanne, experienced the sudden killing of my mother. A drunk driver killed her instantly. Our twin sons were just four. They never had the opportunity to experience a relationship with her as a loving grandmother. I was told the drunk driver had multiple DUIs and the next day appeared in a pub wearing a T-shirt saying “I’m a killer.” This was before MADD Canada became “a national network of victims/survivors and concerned citizens working to stop impaired driving and to support victims/survivors of this violent crime.” When my mother was killed drunk driving was socially dismissed as ‘macho’ or “how young men are.”

Involvement in MADD helps sooth pain and support healing. MADD has transformed social attitudes. Drunk driving is no longer okay behavior. Drunk or alcohol-impaired driving is a criminal offence and MADD worked at developing blood alcohol standards. Such social advocacy efforts can help cope with the pain of unjust losses.

Why a feminist analysis as part of the Nova Scotia mass shooting inquiry?

Working to demand an independent public inquiry, although successful, these past few months of witnessing how hard the families so victimized have battled, has been painful. And this success is only a beginning of their search for truth-telling answers.

Requesting a feminist analysis in the mandate of the inquiry is similar to the social, personal and community, caring MADD has offered since incorporating in Canada in 1989. Like MADD a feminist analysis seeks to prevent ongoing violent behaviors. This means no longer is it acceptable to normalize drunk driving—likewise, it is no longer acceptable to dismiss the misogynistic attitudes that contribute to male violence against women and children that are inflicted in all Nova Scotian and Canadian communities. MADD asked Canadians to change our attitudes, to view drunk driving as a violent crime that kills and causes much pain and suffering. A feminist analysis is asking Nova Scotians to be determined to tackle misogyny to prevent the continuation of all forms of male violence against women and girls—from assaults, serial assaults, torture, femicide, to mass killings that have a connection to spousal or intimate partner violence.

A request for the written inclusion of a feminist analysis as shown in this diagram will not distract from the mandate of the provincial-federal inquiry. Instead, requesting the written inclusion of a feminist analysis directly delivers the opportunity to name misogyny as a social attitude or a hate crime. A social attitude that nurtures violent relationship and community crimes such as the most atrocious mass shooting that Nova Scotian families and communities just suffered. Nova Scotians must be prepared to realize misogynistic-based violent crimes will continue unless directly named and socially addressed as a provincial fact-of-life. 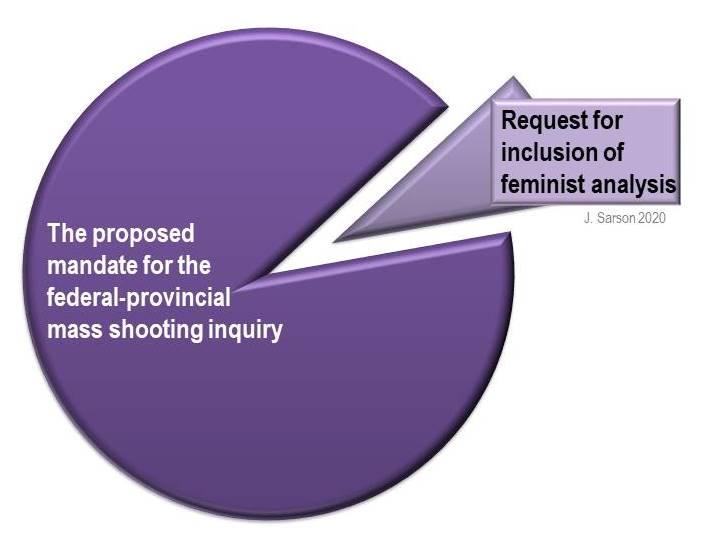 What is a feminist analysis?

The website of Public Safety Canada lists 12 terms of reference for the previously planned federal-provincial review of the mass shooting “event.” These 12 points predominately centered on:

Without question there is the need to address the infliction of gender-based violence in reference to the atrocities of the mass killer’s behaviors. This, however, keeps the focus within the policing investigation. This means the root issue of misogyny and its connection to male violence of specifically naming and understanding femicide as a distinct crime is not undertaken. This is why we call for a feminist analysis to be written into the mandate of the review. Preventing acts of male violence against women and girls requires a cultural-behavioral shift, just as MADD required a cultural-behavioral shift.

Both federal and provincial Ministers for the Status of Women Maryam Monsef and Kelly Regan are invisible in this mandate process. Their silence is most disturbing. The mandate of these federal and provincial departments is stated as combating violence against women and girls culturally and behaviorally and to achieve the human rights equality of women and girls in Canadian society.

Our expectation of the Ministers’ mandates was to advance addressing how many forms of male violence against women and girls exist in Canada’s culture, including in Nova Scotia. Women in this country pay taxes. Women dedicate hours of volunteer contributions to advance the human rights equality of women and girls including the right to life and security to be safe. As we just said, the Ministers’ non-involvement and silence is most disturbing.

Prevention of violence in Nova Scotian families requires dealing with the misogynistic culture in Nova Scotia and in its institutions. It means dealing with the misogyny in the RCMP culture and that of other police services. It means examining how misogynistic attitudes influence police responses to reports of male violence against women. We have been told that male violence against women crimes is often treated as “a lesser crime,” yet in reality these are very violent and serious serial crimes.

A request for the inclusion of a feminist analysis into the inquiry does not interfere with investigative mandates. Its focus is on prevention. Much like MADD, which focuses on educating Canadians that drunk driving is violence that must end because it kills and harms, a feminist analysis is similar. A feminist analysis names and educates about the destructive attitude of misogyny. A feminist attitude focuses on preventing male violence against women—preventing assaults, serial assaults, torture, femicide, and public mass shooting that most commonly begin with male violence against an intimate partner.

Misogyny is systemic within mainstream Nova Scotia and Canadian culture and agencies. To prevent male violence against women awareness interventions about socialized and normalized human inequality of women and girls needs to be spoken out loud, just like Canadians talk about the weather. Talking freely and truthfully can transform the hidden impacts of misogyny into prevention thus contribute to efforts to end atrocities such as the mass killings of April. A feminist analysis necessitates caring about all of Nova Scotian and Canadian women and girls–if the serial assaults, torture, femicide, and mass shooting atrocities are to never happen again.

In addition, a commissioner who has feminist expertise, knowledge on misogyny, on male violence against women, and on femicide needs to be seriously considered.

Nova Scotians and Canadians now have this choice. Like MADD worked to care, to prevent and reduce killing and injury, we now can take this violent mass shooting inquiry into the work of caring and prevention. We now have this choice. We can work to deconstruct misogynistic norms that kill and cause injury. Or else openly admit to accepting the ongoing harms, violence, and destruction misogynistic violence inflicted against women and girls. We have gained this option of seeking the inclusion of a feminist analysis in the mandate of the inquiry. What do Canadians, Nova Scotians, and federal-provincial leaders want to do is the question?

Voice the need for a feminist analysis to be written into the provincial-federal inquiry mandate. Call Bill Blair, Minister of Public Safety, at 1-613-995-0284.

Next Post PSA: Petition calling for reparations for Afrikan/Black people in Canada