Originally posted in the excellent RankandFile.ca

KJIPUKTUK (Halifax) – Lynn Jones has been fighting injustice in Nova Scotia for a long time. As an African Nova Scotian living in Nova Scotia, a province with its share of racism, and with fearless civil rights activist Burnley ‘Rocky’ Jones’ as an older brother and role model, it is hard to see how it could have been otherwise.

Much of her activism has been within unions. Jones became active in her Public Service Alliance of Canada (PSAC) local, and from there she moved onto the provincial and national stage.

In Nova Scotia Jones helped organize the first PSAC conference on anti-racism in Canada. In 1992 she became the first woman of colour to serve as a vice president in the Canadian Labour Congress (CLC), where she continued her human rights and anti-racism activism.

It all started in 1979, when as a young Black woman Jones started a new job at the local Canada Employment Centre in Dartmouth. It was a temporary position, and Jones told herself not to rock the boat. “I wanted to become a permanent employee, and I knew that If I started anything that might not happen,” she says.

On the need to  speak up

I noticed how my co-worker did not refer people from East and North Preston (two African Nova Scotian communities) for job interviews, no matter who well qualified they were. 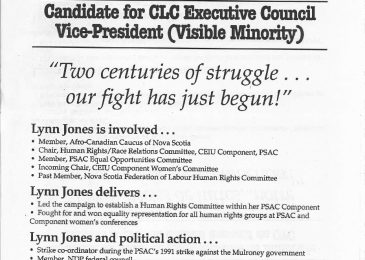 I remember thinking, I don’t care if I ever get this job, I can’t see this injustice continue. It was so bad that the manager called us both into the office. The manager addressed it, but not by making that person refer the people from Preston. Rather, I was given my own quota to refer someone from the Preston area.

But I thought, this still is not justice because my colleague never had to change his ways.  It was about how this community was being marginalized. The union didn’t involve itself. They didn’t see it, they thought everything was fair.

On joining the union

Part of that had to do with my brother Rocky (Burnley “Rocky” Jones). His workplaces weren’t unionized. He was so excited when I became part of a unionized workplace. He said, oh you’re so fortunate, you’ll be in a union, and I didn’t even have a clue what that meant.

I was only a term employee, but I could see things in the workplace that weren’t right and I wondered why people took this lying down, and never said anything. When I wandered into the union meeting, I was amazed to discover that people were resisting. That was an eye opener. Oh my goodness, these people see what I see.

On encountering racism in her Local and becoming president

Meanwhile the local was ready to go into receivership, because there was nobody to hold office. Me and another young Black woman stepped up, just to keep the Local going.  I decided to run for secretary. I just wanted to help out.

But then the Local executive decided they weren’t ready for a Black person in a leadership position, and that they would hold their positions after all. I was so upset that I decided to run for president. I asked all the people in the office who didn’t usually attend meetings to come out. I won the presidency, and the other Black woman became shop steward.

Once I became president my first task was to get trained. I couldn’t believe all the training that was available.  If the community had the kind of training opportunities that the union offered I know we would have had a totally different community in terms of getting changes, understanding your rights and all of that.

I felt that the union had  a responsibility to the community. The largest organization here in the African Nova Scotian community was the African United Baptist Association. The Association was trying to define terms of reference for their different committees. The union does that all the time. So we provided the funding to go to a wonderful training facility for a weekend and the union helped with the facilitation. We often did that kind of thing.

When a downsizing federal government announced the closure of the small Canada Employment Centre in the impoverished North End of Halifax in 1996, Jones became one of the leaders of a 122 day long occupation. 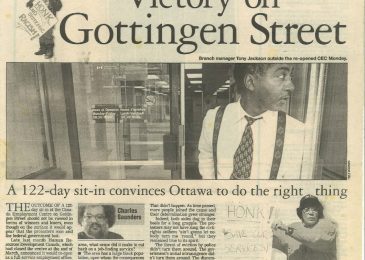 The community was very active at that time. We had a group of people who were protesting everything. There was a small core group,  a person from CUPW, somebody from the library, people from the arts community. If somebody noticed that something was going down, you just made a call and we all arrived with our placards. We used to call ourselves rent a demo.

There were cutbacks happening with employment offices across the country. We said let’s get together. We met at a tavern, it was about maybe six of us. Sitting around having a beer. We said what are we going to do? Somebody said let’s occupy. And we said, what? Six of us?

Each of us was to go back into our communities, in secret, to find out if people were interested. We quickly determined that people said yes let’s do it. I don’t think anybody refused.

The union became critical. The occupation would never have lasted that long without that union And I don’t know how many unions would have done what PSAC did. Mind you, they didn’t do it because they were so devoted to this poor and culturally diverse community. They did it because key people with power in the union movement told them to do it.

PSAC put in  a lot of funds to keep that occupation going. It was their membership working in the building, and they had a bigger battle going with the government.

There was a lot of racism among unions. Had it been a different issue, other unions would have been right in, doing marches and what not.  I naively assumed that the Federation of Labour here would organize a march or a demo, but it never did. But I know how unions bus people in, and how they have money, if only they want to.

We had a huge demo in Parade Square (at Halifax City Hall), and again I thought, oh the unions will bring their members in by the busload, this is such an important issue. I was wrong again. Bob White (at that time president of the Canadian Labour Congress) came, but local unions didn’t do their job. Yet we had backing from every newspaper, every tv outlet in town.

Staff loved the occupation, they were solid. Some actively participated. But I was the leader, I was on the news, at the press conferences.

Towards the end, unbeknownst to the government, we’d had enough. We were trying to figure out how to get out of this. It was time to close her down. And just when we were having those conversations the regional director called, she wanted to make a deal. But she wouldn’t talk to me.

Part of the deal was that I wouldn’t attend the signing of the agreement. It took me two seconds to say  that I am not going through 133 days and not be there on the last day. I didn’t care about my job anymore. There comes a point that you stand up for your rights and your community, you don’t care anymore. .I had full confidence that the community would protect me, and it did.

Are things getting better? I don’t think in those terms, I am more interested in what is changing and what isn’t, and how much is on the agenda that’s not being dealt with. I don’t really know what’s going on inside unions anymore, but from where I stand I don’t hear their voices on these issues,and I don’t see them.

But I do see individual union members, and organizations such as Solidarity Halifax, and the environmental justice groups. I am so pleasantly surprised by many young people, oh my goodness, they can really mobilize.

In my mind it doesn’t take a whole lot to organize people in the workplace. When I would mobilize people. I didn’t start from my perspective, I asked, what is troubling you? What is on your mind?

At one time staff in my office was upset because the manager was putting people in higher level positions without competition, just because they were his friends. I called a meeting after work. We didn’t even call it a union meeting. We put all their concerns on a flipchart, and took each one to management.

But management wasn’t taking our complaints seriously. So we decided to all wear black armbands, and we went on a work slowdown, not even as a union, just on our own. The office went crazy. Eventually they turfed the manager out.

The same principle applies to mobilizing communities. In the Halifax North End inevitably the people’s number one concern is jobs, meaningful, well paying jobs. But to this day, there is not one organization that worries about jobs here in the North End.

Next Post Calgary to offer a $5 monthly transit pass for its poorest residents. What about Halifax?