KJIPUKTUK (Halifax) – Sobeys came out fighting when in 2009 Andrella David, a Black woman falsely accused of shoplifting, charged that she was a victim of racial profiling by an assistant manager at its Tantallon store. 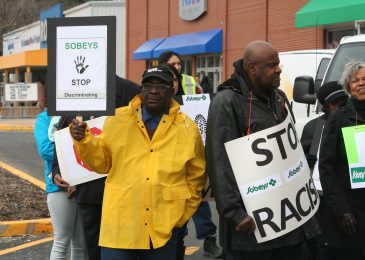 No apologies were forthcoming in the early days after Ms. David first raised the issue.

Then, when Ms. David didn’t go away, the grocery chain aggressively fought its way through the Nova Scotia Human Rights hearings. During these hearings the grocer consistently referred to Ms. David as a shoplifter, even though there was not a shred of evidence for that.

Next, when the Board of Inquiry chair found that Sobeys had indeed engaged in racial profiling, Sobeys appealed.

The company was pursuing this approach because the Nova Scotia Human Rights Commission’s (NSHRC) rules and attitudes make it attractive for companies to fight until a settlement is reached.

That in doing so it greatly extended the suffering of Ms. David and the Upper Hammnds Plains residents was of no concern to the company.

“We want what Zellers got”

It worked for Zellers and Hudson Bay, it should work for us, the grocery chain must have thought when it launched its appeal.

In April 2008 Kathleen Viner was a victim of shopping while black at the Zellers store in Greenwood, Nova Scotia.

Viner, who is African Nova Scotian, was stopped by two security employees and searched, even though she provided a receipt for a small rug that she had bought. She was 78 years old at the time.

Deeply hurt, Kathleen Viner filed a complaint with the NSHRC in March 2009, and a Board of Inquiry was appointed in July of 2011.

Shortly after, Ms. Viner passed away, and the NSHRC continued the case on its own, denying Ms. Viner’s daughters the legal standing they requested and were morally entitled to.

To nobody’s surprise, the Human Rights Commission and Hudson Bay settled. Staff would receive training, but Hudson Bay, the legal successor to Zellers, did not have to admit to any wrongdoing.

When Sobeys launched its appeal, it must have wanted a similar deal. Settlements are typically secret, and parties are seldom required to admit guilt.

And in Nova Scotia you get a settlement by litigating to exhaustion. After all, human rights lawyers are expensive, as former firefighter Liane Tessier can testify. However, for large corporations legal representation is just another cost of doing business.

The Sobeys’ saga should cause Nova Scotia to take a closer look at the workings of its Human Rights Commission.

Is the Commission too quick to settle disputes? Should settlement agreements be in the public domain rather than secret? What can be done to counteract the often prohibitive legal cost of launching a human rights complaint?

Rally, talk of boycott made all the difference

In Sobeys case things didn’t go as planned. But the scheme fell apart only because the courageous Ms. David and the proud residents of the African Nova Scotian community of Upper Hammonds Plains refused to play along.

A large rally, talks of boycotts and media coverage generated a lot of bad publicity for Sobeys, and last week the company decided to withdraw its appeal.

According to Stephen Kimber, writing for Metro Halifax, this is the weasel-worded non-apology it issued: “Sobeys regrets that this matter has taken so long to come to a conclusion.”

For crying out loud.

Sobeys behaviour has been absolutely reprehensible, from the very first to the very last.

But then again, Sobeys was simply working a flawed human rights system here in Nova Scotia.

Previous Post Lives on welfare: The day I got yelled at by Community Services staff

Next Post Truth and Reconciliation in Nova Scotia’s classrooms, a progress report