KJIPUKTUK (Halifax) – Today a judge offered a glimmer of hope to income assistance recipients who live with disabilities and rely on an allowance from Community Services to pay for their dietary needs. 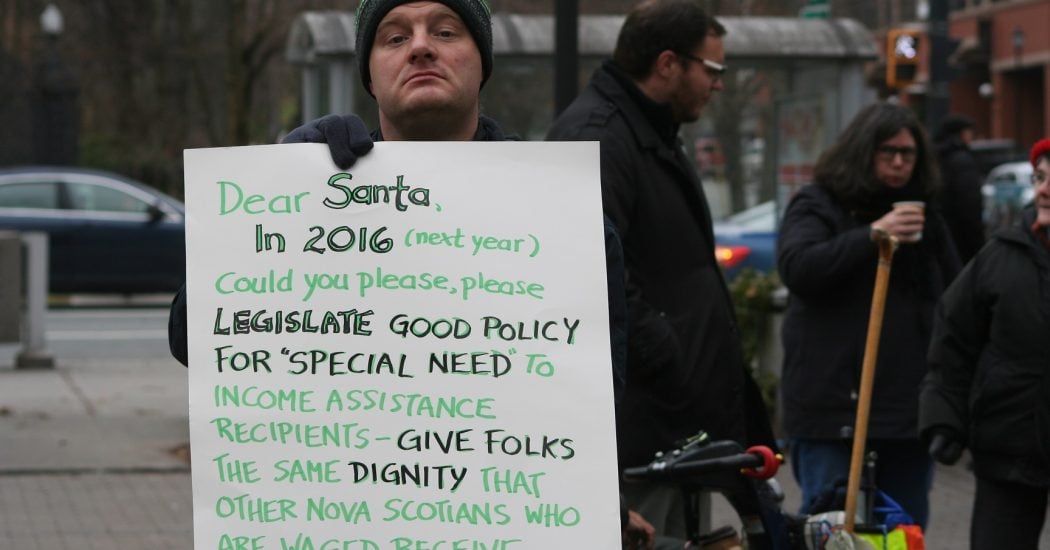 In their quest for such a tribunal the group had argued that their special needs allowances have not kept up with ever rising costs, and that was discriminatory.

A NSHRC investigator recommended that a tribunal occur, but nonetheless the NSHRC Board of Commissioners decided against it, and dismissed the complaint without even holding a hearing.

“That’s all we want, a hearing”

The judge’s decision is not quite a victory, though. The NSHRC could simply decide that after proper reconsideration there still was no need for a tribunal.

But at least there is still a glimmer of hope, says Vince Calderhead, a senior staff lawyer at Nova Scotia Legal Aid.

“I am very pleased that the complaint is still alive and optimistic that when the decision is reconsidered the Human Rights Commission will grant us a hearing. That’s all we want, a hearing,” Calderhead says.

Calderhead was equally pleased that the judge suggested that a new investigation should not be required. During the court case the Human RIghts Commission had said that’s what it would do if it lost the case.

“For us that’s a huge relief. A new investigation would mean a delay of at least six months. Given that none of the parties had expressed any reservations about the previous investigation there was absolutely no need for that,” Calderhead tells the Nova Scotia Advocate.

What is a special needs allowance?

Special needs allowances are provided by the Department of Community Services to help people pay for special diets, among other things.

The five people who are lodging complaints have different dietary needs, but they all live with physical disabilities.

Their submission to the court states that from 1996 to the present, the Province has increased the basic personal allowance for adults by 91%, (from $144 to $275 per month).

Yet during the same time period special diet allowances did not increase at all, despite increases in their costs.

That’s not fair to people with disabilities, and what’s more, it’s discriminatory, the group says.

What the judge decided is potentially very important for people on welfare who get a special diet allowance.

If the case proceeds to a tribunal, and if that tribunal decides that discrimination plays a part, then Community Services will likely have to raise these special diet allowances, possibly by up to 91%.

Time will tell. We will keep you posted.

Updated to reflect the actual increase of the basic personal allowance for adults, 91%, not 77%.

If you can, please support the Nova Scotia Advocate so that it can continue to cover issues such as poverty, racism, exclusion, workers’ rights and the environment in Nova Scot

Next Post Lives on Welfare. Emma’s story, a tragedy of errors