KJIPUKTUK (Halifax) – Last Thursday I spent a wonderful hour and a half or so at St. Mary’s University going through boxes of newspaper clippings, minutes posters, and brochures related to well over forty years of civil rights, labour and social justice struggles here in Nova Scotia and beyond.

All of it is collected by tireless local activist Lynn Jones, whose boxes and trunks of stuff recently found a permanent  home at the St. Mary’s University archive

Jones started her collection in the sixties when she was eight years old. She has been clipping newspapers and storing away other documentation ever since.

Her union work, her anti-racism work, her fight against racism within the union, her fight to stop the government from closing the employment office on Gottingen Street, her contribution as a Canadian election observer in South Africa when Nelson Mandela was elected in 1994, it’s all reflected in the collection, and there is much more.

“It’s like birthing. I had it for so long , my whole life, all these years and now they are leaving me. I carried these boxes and trunks through rain, sleet, hail, to every apartment and house that I ever owned,” says Jones. “And it had to have a special spot, I didn’t want to put it in a damp basement. Even as  young girl I was conscious of that.”

I especially liked going through a box from Jones’ early days. It’s fun to meet this young girl curious about the world, and see that curiosity expand over time. There are newspaper clippings about Jones’ musical and athletic accomplishments (she competed in the Canada Games), and obituaries (a recurring theme throughout the collection), but also, as Lynn grows older, an increasing amount of political stories, as well as articles documenting accomplishments of often famous Black people.

Her scrapbooks were popular, says Jones. “When I was young people would come over and I would always show them my scrapbooks. A lot of people would be fascinated, but sometimes a clipping would affect their families, terrible things. I wouldn’t want them to be hurt by it , so I would tear it out quickly,”

Much of Jones’ activism has been within unions. Jones became active in her Public Service Alliance of Canada (PSAC) local, and from there she moved onto the provincial and national stage.

In Nova Scotia Jones helped organize the first PSAC conference on anti-racism in Canada. In 1992 she became the first woman of colour to serve as a vice president in the Canadian Labour Congress (CLC), where she continued her human rights and anti-racism activism.

The occupation of the Canada Employment Centre on Gottingen Street

When a downsizing federal government announced the closure of the small Canada Employment Centre in the impoverished North End of Halifax in 1996, Jones became one of the leaders of a 122 day long occupation.

When I interviewed Jones last summer this is what she had to say about the occupation.

“The community was very active at that time. We had a group of people who were protesting everything. There was a small core group,  a person from CUPW, somebody from the library, people from the arts community. If somebody noticed that something was going down, you just made a call and we all arrived with our placards. We used to call ourselves rent a demo.

“There were cutbacks happening with employment offices across the country. We said let’s get together. We met at a tavern, it was about maybe six of us. Sitting around having a beer. We said what are we going to do? Somebody said let’s occupy. And we said, what? Six of us?

“Each of us was to go back into our communities, in secret, to find out if people were interested. We quickly determined that people said yes let’s do it. I don’t think anybody refused.

“The union became critical. The occupation would never have lasted that long without that union And I don’t know how many unions would have done what PSAC did. Mind you, they didn’t do it because they were so devoted to this poor and culturally diverse community. They did it because key people with power in the union movement told them to do it.

“There was a lot of racism among unions. Had it been a different issue, other unions would have been right in, doing marches and what not.  I naively assumed that the Federation of Labour here would organize a march or a demo, but it never did. But I know how unions bus people in, and how they have money, if only they want to.

“We had a huge demo in Parade Square (at Halifax City Hall), and again I thought, oh the unions will bring their members in by the busload, this is such an important issue. I was wrong again. Bob White (at that time president of the Canadian Labour Congress) came, but local unions didn’t do their job. Yet we had backing from every newspaper, every tv outlet in town.”

Her papers may have found a permanent home in the Lynn Jones African-Canadian & Diaspora Heritage Collection, that doesn’t mean Jones has any plans to slow down, let alone retire from activism. 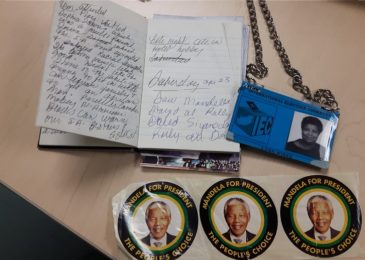 Over the last few years Jones has turned much of her focus on the notion of reparatory justice for African people in Nova Scotia, joining an international call for reparations for historical harms originating from slave trade- related activities.

“I see reparations as very important, and this documentation can really support that. I have been telling organizations to start documenting where reparations would come in. I don’t know myself, we have to figure it out collectively,” Jones says.

Jones is the Chair of the Nova Scotia Chapter of the Global Afrikan Congress, a group that in February organized a well-attended community meeting at the Halifax North Memorial Public Library to introduce the idea or reparation and to begin to flesh out what it could look like.  A report, as well as more meetings, and not just in Halifax, will follow, she says.

The formal launch of the Lynn Jones African-Canadian & Diaspora Heritage Collection is scheduled for this Thursday April 13, at 6:30 PM at the North End Memorial Public Library. Everybody is invited!

Previous Post Weekend video: On environmental racism and being white

Next Post What will happen when we die? Promises to persons with developmental disabilities broken, says group