The Public Services Sustainability Act (Bill 148) imposes a four-year wage package on 75,000 public employees, effectively cutting their wages. It also removes a long service award scheme that the unions bargained for years ago. 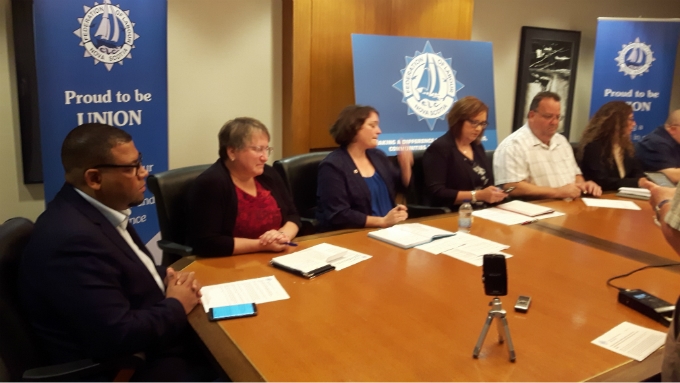 Union leaders of CUPE, NSGEU, NSNU, SEIU, NSTU, CUPW and Unifor explained at a news conference in downtown Halifax this morning that becoming party to the court case will allow them to represent their members and give evidence.

Only the wage package is part of this review, the service award component is excluded. The NSGEU has launched its own appeal of the entire Bill 148, but it may be years before this appeal reaches the Court of Appeal stage. Additionally, Bill 75, legislation similar to Bill 148 and affecting teachers, is being challenged by the NS Teachers Union.

The news conference also allowed the unions to offer some push back on the provincial government’s narrative on the issues at stake.

We are not just dealing with relatively well off civil servants, said Nan McFadgen,representing CUPE Nova Scotia, countering a well established myth. “Many of our 15,000 affected members are precarious workers, many have to work two jobs.”

Many of the 4,500 Unifor members affected by Bill 148 work in in acute and long term care sectors, and are also struggling to make ends meet. “Quite a few of our members make between $15 and $18 per hour, and these workers are getting lost in the narrative,” said Lana Payne of Unifor.

Questioning by local media suggested that since the Liberals won the election they now have a clear mandate to impose their will.

Lana Payne countered that last year’s much diminished Liberal majority together with the gains for the two other parties did send a message that Bill 148 and other anti-union stances are not as popular as McNeil likes to believe. Unions intend to continue to pick away at eroding Liberal support.

The impact of Bill 148 resonates beyond the public sector and is affecting private sector bargaining tables as well, union leaders said.

As a result of Bill 148 and other anti union measures Nova Scotia will find it difficult to keep its workers, either through out migration or early retirements, argued both Jason McLean of the NSGEU and Janet Hazelton of the NS Nurses Union.

And the impact may be felt in more immediate ways as well, Hazelton suggested.

“Nurses and other healthcare workers decide every day whether to work overtime, said Hazelton. “I am not sure what they will do while they feel this total lack of respect,” said Hazelton. “This is serious, this is really serious.”

“This court challenge will not be all that we will do,” said Payne. “We will continue to organize and mobilize, and we will have an impact.”

See also: Premier McNeil’s Bill 148 takes us back to the dark ages

Next Post Op ed: Bill 148, time for labour to show its power