“…they can kiss some treaty ass, from Elsipogtog to Stewiacke”  – El Jones

KJIPUKTUK (Halifax) –  Last Sunday’s silent auction, a bountiful show of support for the Alton Gas Water Protectors held at the Bus Stop Theatre in Halifax, was well attended and a success by any definition. 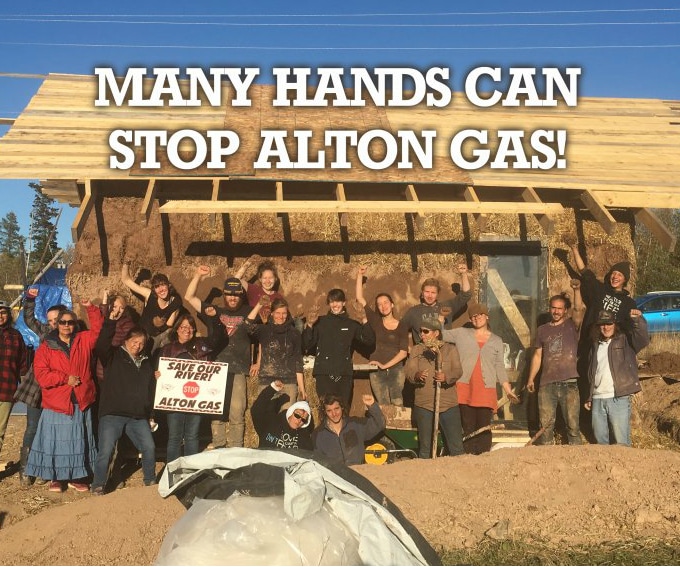 The event was organized by Solidarity with Alton Gas Resistance (SWAGR) a Halifax-based coalition of activists from the Council of Canadians, Ecology Action Centre, Solidarity Halifax, and the larger community.

The event opened with drum-song, and water protectors Dorene Bernard and Dale Poulette spoke about their gratitude—especially for their fellow water protectors giving their passion to the cause down by the riverfront.

The community offered up their creativity and help with offers for healing, beautiful things to put on our bodies, books, music, and—in true Halifax fashion—much art.  There was a drum decorated and donated by Alan Silyboy, prints by David Brooks, and much more.

Robin Tress, a spokesperson for SWAGR, spoke of the depth of the relationship between settler allies and Mi’kmaq water protectors. Individuals have been spending time throughout the struggle, asking questions, showing up, putting in some muscle and taking lead from front-liners and band members, said Tress.

In the best way the struggle to keep Alton Gas from dumping salt brine in the Shubenacadie river provides us all with the opportunity to create healthy connections between Mik’maq and settler allies in the Maritimes. It has impressed on us a sense of organizing in allyship, taking the lead from our first nations and keeping the land and waters safe, said Tress..

If you didn’t make it down this Sunday, you can make a donation here.

Previous Post Judy Haiven: The Halifax explosion – When is a war crime merely an accident?

Next Post Tony Seed on the Halifax Explosion: No harbour for war!