KJIPUKTUK (Halifax) – This Monday the City of Halifax and Halifax Fire will formally apologize to firefighter Liane Tessier. Tessier suffered systemic gender discrimination and was treated just horribly by colleagues, chiefs, the city’s management, and the human resource department.

The apology is part of a settlement reached after city lawyers decided they did not want to see the case go to a (public) Nova Scotia Human Rights Commission tribunal.

However, it’s not just the city that should apologize to Tessier. The Nova Scotia Human RIghts Commission owes Tessier an apology as well for deciding that her case lacked merit after an investigation that was totally inept and took five long years. 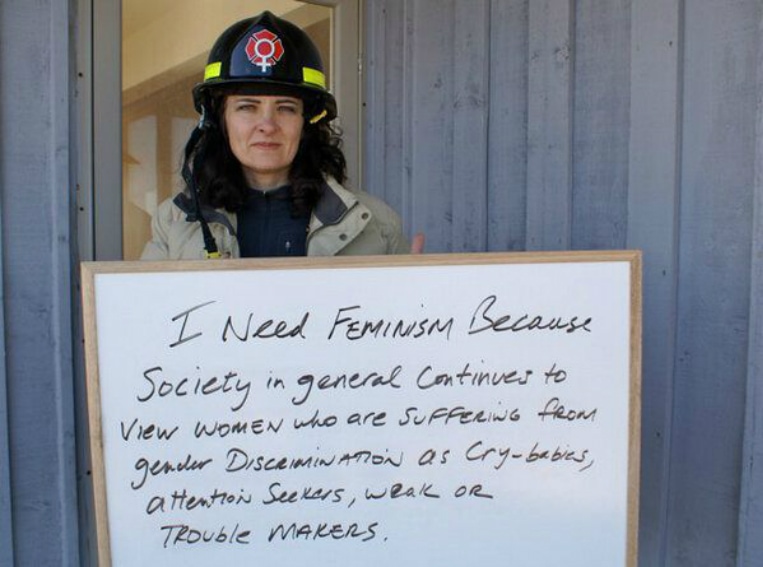 That would have been the end of it, if it wasn’t for Tessier taking the Human Rights Commission to court to get her case back on the rails. We would have been none the wiser about the culture of misogyny that persisted at Halifax Fire at the time had it not been for Tessier’s courage and perseverance.

Tessier won that case. Justice Arthur LeBlanc quashed the original dismissal, and in a precedent-setting decision awarded damages to Tessier. Key witnesses were not heard, there were numerous delays, and investigators showed bias against Tessier throughout, LeBlanc concluded in May of 2014, as he ordered the Commission to try again.

This is how Tessier describes her dealings with the Human Rights Commission on her website, where she has documented the entire case in great detail.

When I realized my employer HRFES was not going to do anything to help me, I went to the NS Human Rights Commission in 2007. It was February 2012 by the time the report was concluded.

Given that the investigation took five years to complete, I expected a thorough and conclusive investigation. What I received was just the opposite.

There are many issues I find troubling with how my case was investigated, but overall there has been a complete lack of regard and professionalism.

Troublesome bureaucracy hindered proper operations at the Commission. For over a year of these five, my case laid dormant and no one got back to me. Even when the case was finally assigned, it was passed between seven different officers who all had little to no communication with me over the five years it took to investigate my complaint.

None of these officers contacted the witnesses they said that they would, and other documents I provided as evidence were not even considered.

It took the HRFES nine months (May 2008–February 2009) to respond to my Nova Scotia Human Rights Commission complaint, after numerous missed deadlines and extensions. It was during this time the NSHRC officer assigned to my case informed me that the HRFES was not co-operating and was ignoring his calls to respond to my complaint.

During 2010–2012, the NSHRC officer that was assigned to my case was Herbert Desmond. I was unaware at the time that he had been accused of sexual abuse at the Nova Scotia School for Colored Children where he worked years before being given employment with the Nova Scotia Human Rights Commission. He did very little to investigate my complaint, made inappropriate assumptions with regards to it and showed bias against me through his report, ultimately recommending my case be dismissed.

Despite submitting my arguments and letters of complaint against Desmond and asking the Commission to have his report be reviewed by a different Officer, the final decision from the Commission’s (board) in February 2012 was to dismiss the case outright.

I felt that there was a clearly lack of knowledge or insight into systemic discrimination at the NSHRC, particularly in regards to gender and sexuality. This is unacceptable considering that HRM is home to a number of world-renowned scholars and activists who work in this area.

While investigating my case, the NSHRC did not uphold to their mandate to value individual dignity and self-worth. I felt as though I had been crossed off their list and that my case was viewed as irrelevant and insignificant. It’s deeply troubling that organizations like human rights commissions and others that should be progressive are not doing their job or do not seem to know how to do their job.

In a last-ditch effort — after spending thousands in legal fees and dealing with the emotional toll of this five-year process — I filed for a judicial review against the NSHRC in 2012 for an inadequate and cursory inquiry into my claims.

I won, and in February 2014, the Supreme Court of Nova Scotia ordered that my gender discrimination complaint be re-examined by the Human Rights Commission. Once again, this took a number of years.

In May 2016, my case was referred to a board of inquiry, and it took another year before dates for the hearing were decided in October 2017.

We asked the Nova Scotia Human Rights Commission what measures it has taken to prevent what happened to Tessier from ever happening again to others.

“At this time, due to privacy reasons we cannot comment. Information related to this case is expected to be released within the coming weeks, likely soon. I can keep you posted,” responded Adria May, spokesperson for the Commission, on December 11.

We clarified that our question did not pertain to Tessier’s case and was general in nature, but to no avail.

Please check out Liane Tessier’s blog containing important information about her case that deserves to be widely read.