Former firefighter Liane Tessier speaks at the 2018 Halifax Women’s March about her 12-year battle with HRM and the Nova Scotia Human Rights Commission.

My name is Liane Tessier. I was once a firefighter, but I was targeted and forced out of a job that I loved and was good at, because I spoke out against the discrimination I faced as a woman

I was harassed, bullied, humiliated, threatened and denied a permanent job because of my gender. They tampered with my personal belongings, spread malicious lies about me, and when I spoke out about it, they called me crazy.  Fire dept officers told me that my claims of harassment were more ‘perceived than real’. In other words, according to them, I was making things up – it was like psychological torture. 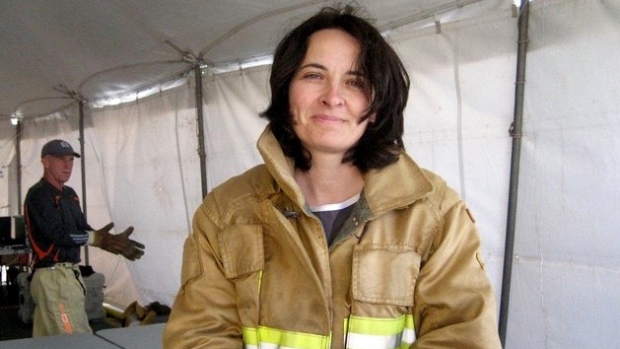 The complaints I filed formally, against the Halifax fire dept, were dismissed as irrelevant. What’s worse, I was blamed for the misogyny I faced at work and for showing signs of depression that came from it.

Even my female colleagues stayed away from me, afraid to share their own experiences, or even to talk to me about mine. I was isolated and intentionally ignored by officers and upper brass.

When I went to the Nova Scotia Human Rights Commission in 2007, they also ignored me. I spent thousands of dollars to have mountains of well-written documentation reviewed by lawyers, but the Commission left my case on a shelf to gather dust for 5 years. When the human rights officers finally did attempt to investigate, their work was cursory, sloppy and biased.

This adds to the hopelessness of an already hopeless situation when one realizes that even agencies like the NSHRC are not doing their job or do not seem to know how to do their job.  And other advocacy groups that I approached, like women’s groups were hesitant to support women like me who was suffering from gender discrimination within the male dominated workplace.

To be honest, the lack of support from individual women and women’s groups was one of my most devastating discoveries throughout this long journey.

Over the years I sought the aid of many individual women and established and grass roots women’s organizations here in Nova Scotia and within Canada and got little or no response. When connections were established, they were temporary. No one stayed the course with me, when times got urgent, not one group responded.

Even the small numbers of groups here in Nova Scotia that do support women in the trades seem to fall short in aiding women who are suffering from gender discrimination and they did not respond to me when I came knocking.

What I realized in my long fight for safety and gender justice is that women are afraid.  Afraid of each other, our employers, our unions. Even women’s groups are afraid.

Abusive people know that women are going to be intimidated and continue to hope that we will be complacent and silent, too afraid to speak up. – the employer and the men in question count on it.

But it’s no wonder: the suspicion, paranoia, anger and even hatred that was evident in my situation shows the disdain with which women are treated in many workplaces, where we are not encouraged to speak up about harassment and fear further abuse by co-workers, unions and employers.

All too often, women adopt ways of coping within the workplace: dodging the men we fear, ignoring the bad behaviour, making excuses for the perpetrator, or minimizing the pain of being abused, most often we blame ourselves, or attack other women

We are told, like I was constantly, that speaking out will be bad for us, or will cause more trouble than good for us and everyone else. This sentiment is shared by many, including caring friends, family and many different kinds of professionals who think that they are doing us a favour by warning us not to rock the boat or by reminding us that we could lose our jobs. These same people even go as far as telling us to keep a low profile, to put up with harassment, or to just “get on with our lives”.

In other words, we are taught that the situation is impossible to change.

Yes, women more than ever are speaking out–but let’s get real; it is still very hard– and for many it is not an option – not all of us can.  Responsibilities at home involving children and other family members often make it impossible for women to bear the brunt of retaliation.

But for those women, who are in a position to speak, need to try and find the courage to do so, so as to challenge the system and support each other.

Because I spoke out against the gender discrimination in the fire service and fought against the Human rights Commission itself, I was able to win my case and finally after 12 years, have the HRM admit, acknowledge and makes amends for the decades of abuse and discrimination they put me and other women through.

Most people would not have bothered to put the time and effort in to fight back against the discrimination I was up against. I don’t blame them. It took twelve years, thousands of dollars, and much emotional, psychological pain to get to this point.

For me, coming forward, speaking out, has been the sanest thing I have ever done in my life, no matter how many people try to shut me up. Remaining silent is guaranteed only to change nothing at all.

Advocating for your rights as a woman, wanting a safer workplace, and speaking out against harassment should not be a cause for punishment, and yet, in many cases, it is.

Back in 2005, when I first started speaking out about the harassment that I was subjected to, I was terrified, I knew instinctively I would not get believed or taken seriously, But despite the backlash you will receive in the workplace, I will continue to speak out and encourage other women to speak as well, if you can.

Women and our allied men need to support each other, especially when the times get tough.

I don’t want other people to experience what I have. So, I’ve formed a group, called EQUITY WATCH. We will support you, whether you are ready or not to speak out. We will help you find your voice.

Our objectives are to 1) Support women and other marginalized people who have encountered equity issues at work, 2) Hold a support group to hear stories and provide practical solutions, and 3) Unite with others to campaign for equal rights at work.

Organizations and employers don’t change on their own. They need to be monitored and watched. EQUITY WATCH is a group that will fight back.

The HRM can dismiss and ignore me a single voice for 12 years, but they cannot ignore thousands of women standing up shoulder to shoulder.

Thank you for listening.

Next Post Rebecca Thomas: For all the women out there who were never believed