This article was originally posted on the website of the James McGregor Stewart Society. Re-posted with permission.

KJIPUKTUK (Halifax) – In a nutshell, restaurants in Canada exist on razor thin margins – around 4% according to the Globe and Mail. 80% of restaurants fail within 5 years, so it’s fair to say that restaurateurs make lousy businesspeople. As a result, owners are sensitive to regulation and often opposed to upgrading washrooms to meet public health requirements.

Witness the recent Human Rights Board of Inquiry, where the Restaurant Association of Nova Scotia (RANS) made their best case for driving away customers. RANS said in their memo in support of the province’s curious position that public health protection doesn’t extend to people who use wheelchairs:

“In our sector when we refer to the term “public” we are speaking about the general good for the largest number of people. This unfortunately does not include all people. There are many that we can’t serve for a variety of reasons, including certain disabilities”

Just to demonstrate that both restaurateurs and the province have a great capacity to act against their own interest, here’s a little exercise. I added up the cost of the 770 day Human Rights extravaganza:

I suspect I am way conservative in my estimates, like omitting facilities and stenography charges. So the whole Human Rights process cost at least $82,511.  How shall we think of that?

First, that it was a waste of taxpayer money.  A government that is in thrall to business isn’t motivated to look for creative solutions and, above all, won’t rock the boat. “We’ll be driven out of business!”, says RANS, and that’s all government hears. (Just by the way, government makes about twice the amount as restaurant owners on each meal.)

Instead of throwing $82,511 down the nearest inaccessible toilet, government could simply have given RANS the $82,511 – that would buy a few washrooms. Or they could have given the complainants $82,511 instead of $5,000. That sounds fair……

But there are lots of alternatives: tax rebates, differential assessments. The one I like best is forgivable subsidized loans.

Suppose an inaccessible restaurant is offered a 5-year $25,000 loan at 0% interest to be used for accessibility. A bank provides the capital and the province guarantees the interest.

Look no further than today’s Washington Post for evidence of why a restaurant might want a shiny new bathroom on the main floor.

For the cost of the doomed human rights inquiry, the province could have subsidized 88 loans and made a tidy profit. $984 a month for 5 years is $59,040

Or government could say to RANS “We’ll loan restaurants up to $25,000 and just forgive the whole amount if your increased business generates enough HST to cover the cost of borrowing.” 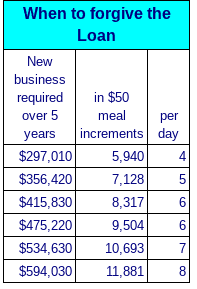 Government has the HST data from previous years.  If a restaurant shows enough increase in receipts to cover the province’s cost of borrowing, the loan is forgiven. In such a scheme, everyone wins. Customers get convenient washrooms, the restaurant gets more customers and the province gets future revenue.  Most importantly, the province gets to obey its own rules.

It is typical of the provincial authorities not to exercise any creative economic thinking.  Accessibility calls for new approaches and less whining!

See also: Victory for wheelchair users in human rights case, and another embarrassment for the Nova Scotia Human Rights Commission

Next Post Charter Schools – an idea whose time has gone. Part 1