KJIPUKTUK (Halifax) – Consecutive years of cuts have left nova Scotia’s more than 100 long-term care facilities with no choice but to cut back on services, recreation programs and food quality. Homes are understaffed and staff is overworked.

In August last year, when the cuts first hit the news Leo Glavine, the minister of Health and Wellness, said it was no big deal. Efficiencies would be found. The number of nurses and continuing care assistants (CCA) would stay the same.  Residents would not be impacted. 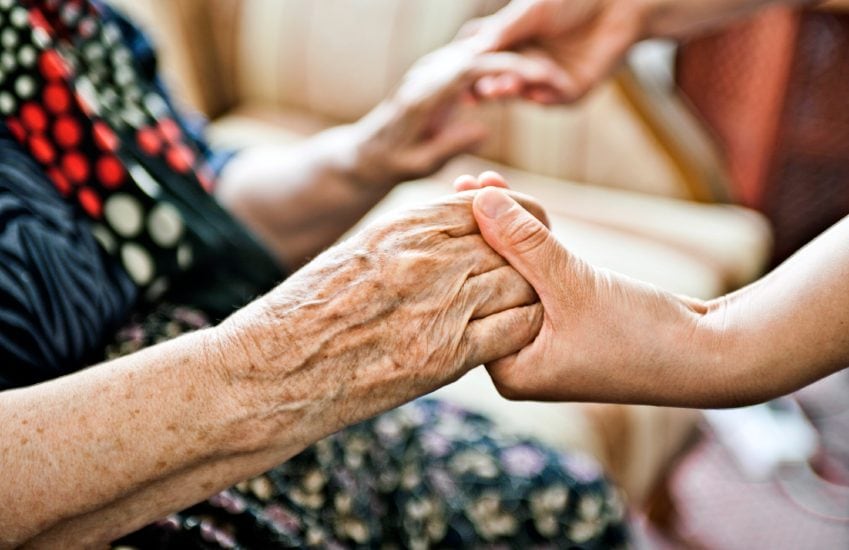 But the people we talked to who work in these facilities say that minister Glavine is wrong, and that residents are paying a terrible price for the government’s efforts to balance the budget.

Understaffed and overworked while patients pay the price

Front-line like nurses and  staff may not be affected, but when a cleaner gets laid off nurses and CCAs have to pick up the slack, and patients end up paying the price.

That’s the experience of Linda MacLeod, who works at the Cove Guest Home in Cape Breton. Because of this year’s $110,000 cut the facility felt unable to fill a position for a dietary aide, and front line staff was asked to absorb her workload. But staff was already overworked, says MacLeod.

“Last night I worked the 3 PM to 11 PM shift with 21 people on the floor, and there was two of us for that entire shift. When that co-worker goes for supper you are there alone. Meanwhile you have families coming after you who want their loved ones looked after,” MacLeod says.

Glavine talks about a shift to home care in defense of the cuts. That may sound great, says MacLeod, but it’s not playing out on the ground.  People still end up in long term care facilities, and when they do their requirements are more acute.

“The government is giving more money to home care, which is a good thing, but now when patients arrive in a nursing home they are in worse shape. Ten to fifteen years ago you had people walk into the Cove, now `everybody arrives by ambulance,” says MacLeod.

That we rarely hear these stories is mostly because few guests are capable of speaking up, MacLeod believes. And not that many patients have regular visitors.

“On a unit of 21 you may only have three families that come in regularly.  And the ones that have nobody, it’s a shame, but the squeaky wheel gets the grease, I guess,” says MacLeod.

“Pork chops are a fond memory”

What we have seen across the province is that they are trying to buy cheaper and in bulk. We are going to more processed food that contains more chemicals, and it is less visually appealing as well,” says Dauphinee.

“As well, we used to offer supplements like Boost to speed up wound healing. Boost comes in many flavours, chocolate, strawberry, vanilla, and they taste like a milkshake and people will drink it.  But now they offer a less costly replacement. It lacks the texture and flavour, and it feels more like medicine to them, and people don’t like it as much,” Dauphinee says.

It’s not just staff who are raising the alarm. Management has spoken out as well. In August last year CBC reporter Michael Gorman spoke with several administrators.

Northwood administrator Janet Simm confirmed Dauphinee’s story.  After a $360,000 cut in 2015, and a $600,000 cut in 2016, Simm told Gorman that the biggest challenge right now is with food, as more and more residents have special dietary needs.

“With rising costs of food and the decreasing budget, it’s a real challenge to meet the growing demands,” Simm said. “This is where people live and you want to make sure the food is high quality because it is a big piece of quality of life.”

Provincial funding for meals and snacks works out to $4.70 per day.

Another CBC story, this one by Elizabeth Chiu and Jon Tattrie, talks to Northwood residents about food quality.They definitely aren’t happy.

It quotes resident Trudie Helmke (72) who says that pasta is scarce, and pork chops are a fond memory. The roast beef she calls an “over-cooked piece of tough meat.” Ketchup and mustard are on the house, but you’ll have to pay for anything other than that.

“It becomes like an assembly line rather than quality care”

There is more. Many facilities are not replacing staff when somebody calls in sick, says Dauphinee.

Working short-staffed in turn puts more strain on workers, which increases the risk of staff injuries, and we get this vicious cycle going, Dauphinee says.

Recreational programs are being reduced, there is less money for supplies. This matters because some of the residents’ interactions occur only with staff, many don’t have families who come in often.

Even the people who do housekeeping, they used to sit down and speak with residents, but with the cuts people are so rushed and they are `working short and they no longer have time anymore.

“It becomes like an assembly line rather than quality care,” says Dauphinee.

Both Dauphinee and MacLeod are active in their union, Unifor. They have spoken with MLAs and hope to raise awareness of what’s really going on in Nova Scotia’s long term care facilities.

We will be speaking with politicians in our areas, and we are also collecting signatures for a petition, says Dauphinee. All healthcare unions are affected by these cuts, and we are all working closely together, she says.

Ultimately the workers would like to see some kind of patient-staff ratio established and enforced.

“Some homes will staff five caregivers, and some will have three. There is no set standard. The department of Health and Wellness has a budgetary standard, we will pay you this much, but that’s all,” says Dauphinee.

She mentions a study commissioned by the US Congress and carried out by the Center for Medicaid and Medicare Services (CMS) that is widely recognized as the most comprehensive and academically sound research to date on the subject.

In Nova Scotia the department only pays the facilities for 3.25 hours per day, says Dauphinee.

“In terms of staffing, we do not prescribe staffing levels except for nursing staff. In accordance with the Homes for Special Care Regulations, nursing homes with less than 30 residents must have a registered nurse on duty for at least eight hours per day.”

“In the absence of a registered nurse, there must be a person on duty in the nursing home who is capable of providing emergency care. Long-term care homes with 30 or more residents must have at least one RN on duty at all times,” writes Barron.

MacLeod is not impressed.

“We need the money put back  that they have taken from us over the last two years,” says MacLeod.

“We lost $110,000 this year out of our budget, and they have the audacity to say it is not going to affect the residents?  That s ridiculous. How can it not affect them?”

Previous Post Lives on welfare: There shouldn’t be a limit on how many epipens you can have