The rally was organized by Equity Watch, a new organization that aims to call out public and private employers who refuse to stamp out bullying, misogyny and systemic discrimination in their workplaces. 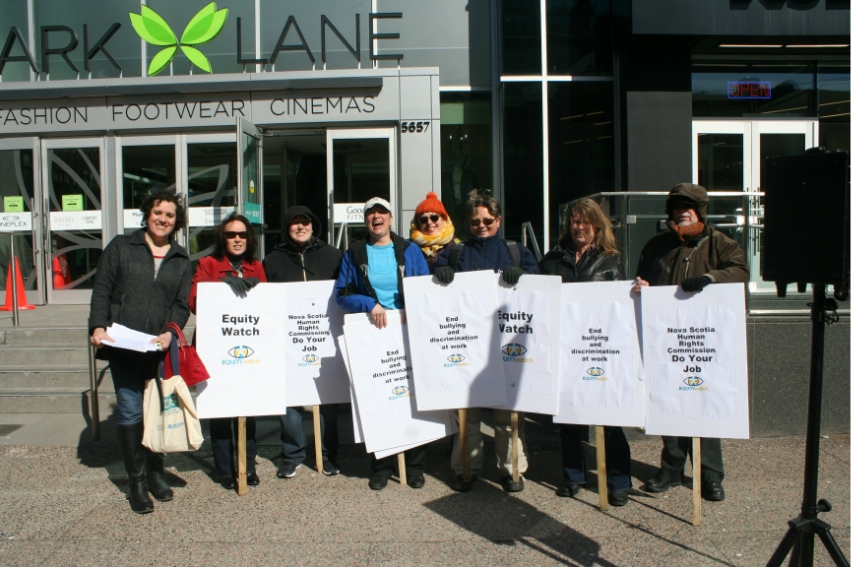 The Commission is too reluctant to take on cases, too slow altogether and too quick to settle in the few cases it does take on, and not communicating with the plaintiffs, the protesters say. Almost all protesters had first-hand experience interacting with the Commission, and all were frustrated and felt let down by an organization that is supposed to stand up for them.

Among the speakers who addressed the rally was Liane Tessier, the Halifax firefighter who last year received an apology from the City and the Fire Department for the years of bullying and misogyny she had to endure.

“10 years ago I naively believed that the Nova Scotia Human Rights Commission would investigate my complaint of gender discrimination within the Halifax Fire service. I made my complaint in 2007, five years later my case was dismissed without a fair investigation. I felt betrayed by a Commission that claims to uphold the value of human rights, and I still do,” Tessier told the crowd.

In her twelve-year battle to get justice, Tessier had to take the Commission to the Nova Scotia Supreme Court. She won that case, and was vindicated in a judgement that condemned the commission’s bungling of the case as shameful. The Commission never publicly apologized to Tessier for the suffering it caused and the years it added to her ordeal, all it ever publicly said it that they’re sorry it took so long.

Also there to address the crowd was Liz Cummings, the Irving Shipyard employee who saw their Human Rights complaint dismissed by the Commission, even though the Labour Board suggested it was the proper venue for their issue.

“We want future `generations to know that there are still sexual orientation, safety and bullying issues that `need a strong voice. Equity watch and me and my wife Shannon want to offer a community of hope. If we all band together and protect each other by standing against injustice than incredible things can happen,” Cummings said.

Kathy Symington, like Tessier a career firefighter who experienced harassment for years in the Halifax Fire service, also saw her complaint rejected during a lengthy process that mostly kept her in the dark. “I was made to look like I was the liar, I was the problem,” said Symington, who called the process to lodge a subsequent complaint brutal. The NSHRC is now investigating this follow-up complaint.

Equity Watch is concerned about a shrinking budget for the Commission that doesn’t even keep pace with inflation, and wants a 50 years old Human Rights Act reviewed and updated.

As well, it is concerned about the high number of cases that are reported but are never pursued. In fiscal year 2015-16 the Commission received 2326 complaints, only 97 were accepted, and only 27 reached some kind of conclusion.

Equity Watch also notes that many complainants cannot afford a lawyer, which makes the process unfair for ordinary people who are typically up against wealthy entities who can afford all kinds of legal support. The NSHRC does not offer that legal support, and people are on their own. Liane Tessier for instance had to spend tens of thousands of dollars in legal fees to pursue her case against the City and against the Human Rights Commission.

There is more, read the full Equity Watch manifesto here.

There will be a rally and opportunity to further discuss these issues this Sunday, April 8, at 12:15 PM, at DANSpace, 1531 Grafton Street, Halifax. Join Equity Watch on Facebook.