This weekend’s weekend video is Seeking Netukulimk, by Martha Stiegman. Learn about Mi’kmaq treaties and stewardship of the land in this lyrical documentary by a master documentary maker.

Protesters at Province House had a simple message for Alton Gas. Go away!

Glyphosate spraying in the face of widespread concerns among rural residents just so that forestry companies can make a bit more money seems pretty outrageous. Yet that’s what’s happening.

A delegation of the Sipeknekatik Band traveled to New Brunswick to demand that Dominic Leblanc, the federal minister of Fisheries and Oceans, use his power to halt the Alton Gas project. The group asserted their treaty rights and warned that the river will be defended, whatever that may take.

In September storyteller and environmentalist Silver Donald Cameron will show his new documentary Green Rights, The Human Rights to a Clean Environment, at Nova Scotia university Campuses. Here is a preview.

Spraying of woodlands with the Glyphosate herbicide continues in Nova Scotia, even though provincial subsidies have ended. And for how long DNR’s moratorium on subsidies will remain in effect is an open question.

Time for Nova Scotia to get serious about climate change and consider a carbon tax, says David Henry in this guest op-ed.

The 2007 decision not to approve the Whites Point Quarry in Digby Neck is still not entirely settled. Now the Canadian government is appealing a NAFTA decision that withholding environmental approval was unjustified. Let’s make sure that the government fights this case, rather than settle, there is too much at stake, says Gretchen Fitzgerald of the Sierra Club Atlantic. 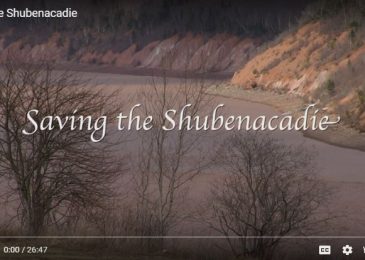 This weekend’s featured video is a very good new documentary about the residents, First Nations people, fishers and naturalists fighting for a pristine Shubenacadie RIver and the rural lifestyle that made them settle in the community. 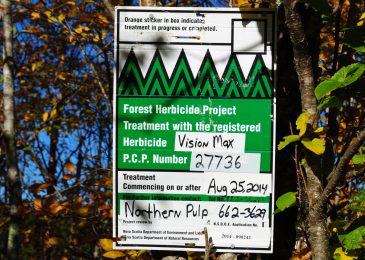 Northern Pulp’s proposed glyphosate spraying program may be bad for your health, but that’s not the only problem, says Matt Miller of the Ecology Action Centre. Diversity in our forests will help us weather climate change, and a softwood-only forest is a bad economic strategy.